Greens welcome “new life” for Park Hill, but ask “Where is the renewable energy?” 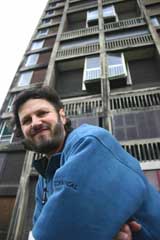 Green Party spokesperson Graham Wroe today cautiously welcomed the plans to redevelop Park Hill flats. He said “It is good news that new life is to be breathed into the flats and investment is coming to the Park area. For too long Park Hill has suffered from and poor quality housing and lack of repairs.

“However I am very concerned that 600 affordable homes in the city centre have been lost. We need more of these in all the new developments in the City. The first priority should be to reduce the waiting lists for housing and find shelter for the homeless on our streets. The residents who have already been forced to move out against their will should also have more say in where they are re-housed – and not, as has happened to some, in another flat in the Park Hill estate so they will soon have to move yet again.

“We need investment in housing, but the council must be careful not to line the pockets of big developers rather than meeting the needs of the people on the housing list. The improvements to the pedestrian routes above the station up to Park Hill are long overdue. The Greens want to insist that these improvements are funded as part of the scheme and will not appear as “sweeteners” on the plans only for them to be forgotten about when the work is actually carried out.

“The proposed “green corridor” from Park Hill down the Sheaf Valley is an exciting idea. But the plans also include a large multi storey car park. Why not have a car sharing club instead? We could have micro wind turbines and solar panels on top of the buildings to generate green electricity for the flats. These changes would help make the Park Hill development a flagship of environmentally friendly living in the city and a much better place to live.”

Note Graham Wroe lives very near Park Hill flats and used to live in Hyde Park flats before they were demolished. He stands in local elections in the Manor Castle ward.