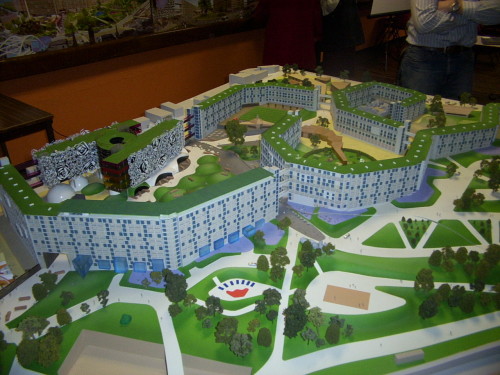 As someone who lived in Hyde Park flats and who has been a close neighbour of Park Hill for nearly 30 years I feel suitably qualified to comment on the latest plans. Some of the ideas are excellent- the allotments, the car club, the green corridor to the Sheaf Valley and the new pedestrian routes will be great assets for the city. However the plans lack any great vision. Where are the micro wind generators and solar panels so that the flats can produce their own electricity and combat the threat of global warming? Renewable energy should now be a feature on all major developments.

I am very concerned that 600 affordable homes in the city are being lost.We need more affordable housing in all the new developments in the city. The first priority should be to reduce the waiting lists for housing and find shelter for the homeless on our streets. The residents who have already been forced to move out against their will should have had more say in where they were re-housed. Some were even moved to another flat in the Park Hill estate so they will soon have to move yet again.

We need investment in housing, but the council must be careful not to line the pockets of big developers rather than meeting the needs of the people on the housing list. The improvements to the pedestrian routes above the station up to Park Hill are long overdue. We must insist that these improvements are funded as part of the scheme and will not appear as “sweeteners” on the plans only for them to be forgotten about when the work is actually carried out.

The reports of the plans have not mentioned how Urban Splash are going to deal with the major structural problem of “flaking concrete”. Having once narrowly missed being hit on the head by a large piece of debris from Norwich Row, it is vital that this problem is addressed.

The large multi storey car park is unnecessary. Park Hill has excellent public transport links, being close to the tram, train and bus stations.The main reason people need cars at present is to get to shops, but new shops will now be on site. It is vital that the shops cater for the everyday needs of the residents.

The Park Hill development could be a flagship of environmentally friendly living in the city and an excellent place to live-but Urban Splash and the Council need a greater vision if this is to be achieved.