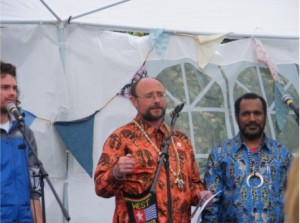 Benny Wenda (far right on picture), Leader of the Free West Papua campaign, spoke at the Sheffield Green Fair last weekend. Benny is campaigning in exile after being imprisoned and threatened with death in his home country. Since 1963, at least 100,000 West Papuans have died at the hands of the Indonesian occupying forces, representing approximately 10% of the population. Countless others have been tortured, raped, intimidated and imprisoned.

Before a supportive audience Benny said “ I am asking Gordon Brown to put justice, freedom, democracy and the rule of international law before national self-interest in exporting arms to this brutal regime. Will the UK Government press the Indonesian Government to cease immediately from using violence and military terror against peaceful West Papuan pro-independence activists?”.

Green MEP Caroline Lucas has offered support to the campaign :

“West Papuans have suffered 42 years of human rights violations, discrimination and abuse at the hands of Indonesia after it fraudulently took control of West Papua in a staged ‘referendum’ organised by the UN.

The Free West Papua Campaign is performing an invaluable service in publicising the plight of the nation and pushing it up the political agenda. I hope to continue working closely with them to ensure the EU applies and keeps up the pressure on Indonesia and the UN to grant the peoples of West Papua a properly conducted referendum on independence.”

Benny Wenda asked people to write letters to Meg Munn MP in her role as a
Foreign Office Minister. More information about the campaign is available at
www.freewestpapua.org.