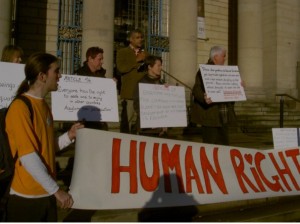 Annociate Nimpagaritse was arrested yesterday and removed to Dungavel Detention Centre in South Lanarkshire. Her friends fear that she will soon be deported to Burundi for a second time, where her life will be in great danger.

Annociate is from the minority Tutsi ethnic group in Burundi and was born in Bujumbura, the capital city. Hutus killed various family members in 1993. In 2004 armed men, who she believes to have been from the FNL (Forces nationals de liberation), a Hutu rebel group, shot and killed her parents at the family home. Annociate and her siblings managed to escape from the house and fled to a refugee camp but she became separated from them and does not know their whereabouts. In the camp she was constantly in fear of discovery by FNL Hutus and in 2005 was helped to escape to UK where she claimed asylum. This was refused as was her fresh claim made in April 2007.

On February 28th 2008 Annociate was arrested. She was held in a police cell at Bridge Street, Sheffield for 3 days in solitary confinement before transfer to Yarlswood. On March 5th she was removed to Burundi. Burundian Immigration did not accept the paper work and she was returned to the UK.

A petition with over 1200 names, including Nick Clegg MP, was collected asking for Annociate to be given permission to stay in the UK.

She returned to normal life, studying at Sheffield College, singing in the choir at St Marie’s Cathedral, helping the charitable work of Assist and meeting her boyfriend Aime (his name means “love” ).Their love blossomed and they got engaged. Her fiancée is also from Burundi, and he has permission to stay in this country, He has a job and a home and can support Annociate as his wife in accordance with requirements of UK law.

Having convinced the Home Office that it was a genuine relationship Annociate was given permission to marry. A condition being that the marriage take place within 3 months. However, the Registry Office required proof of Annociate’s nationality. This had been taken from her when she was deported. Despite repeated requests she was refused an interview to get a new id card. On September 11th the Northern Refugee Centre made further request that she be issued with a new ID card to enable them to marry.

On September 12th at 6.15am she was arrested, and by 4pm she was taken from Sheffield. Her destination is not clear but most probably it is Dungavel Detention Centre, South Lanarkshire away from all she knows. We cannot even begin to imagine the terror in her heart. Aime waits to be able to know where she is.

Annociate fears persecution because of her family history, her Tutsi ethnicity and her gender. The Burundi community here are shocked that she may be sent back again. They confirm her vulnerability and absence of any government protection. This is borne out in international reports about FNL rebel violence and the state of lawlessness in the country. Without any family to protect her Annociate would be in great danger if removed to Burundi. In February 2008 Burundi was listed 5th on “The Index of State Weakness in the Developing World”, published by the Brookings Institute and the Centre for Global Development. The FCO [Foreign & Commonwealth Office] country profile for Burundi stated, “The human rights situation in Burundi remains poor, with widespread abuses committed by all parties, particularly in the rural areas surrounding the capital. Tens of thousands of people remain internally displaced. Killing of civilians, reprisal killings, torture, rape, theft, illegal and arbitrary detention, and forced labour have been reported. Rape and gang rape against women, girls and boys is on the increase. The judicial system has little capacity to act in timely and impartial manner, and impunity is pervasive … ” The USSD, Country Report on Human Rights Practices 2005, 8 March 2006, noted that “The PALIPEHUTU-FNL [Party for the Liberation of the Hutu People/National Liberation Front] continued to commit numerous serious human rights abuses against civilians, including killings, indiscriminate shelling of civilian areas, kidnappings, rapes, theft, extortion, the forcible recruitment and employment of children as soldiers, and the use of forced labor.” Source: Home Office country report on Burundi, 14 March 2007.

If she is deported she would not be allowed to return to the UK for 10 years because of the iniquitous 10 year rule.

Annociate suffers from post-traumatic stress after her experiences in Burundi, but has slowly been recovering with support from her church, her counsellor and friends. She has made excellent progress in her English studies in spite of all the anxiety and she has involved in the charity ASSIST, helping destitute asylum seekers in Sheffield. She hopes one day to become a nurse.

She will now be terrified, unable to contact her friends and supporters and with nobody able to visit her.