Two Green Party speakers spoke at the demonstration for Human Rights in Sheffield on Saturday 4th October. Councillor Jillian Creasy spoke of the imprtance of showing solidarity to asylum seekers, and Graham Wroe welcomed Annociate Nimpagaratse, who has recently been released from detention following a massive letter writing and lobbying campaign. 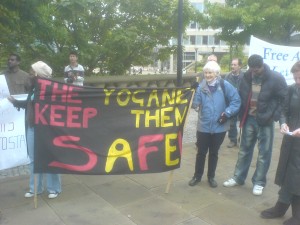 Councillor Jillian Creasy said, “Thanks to Sheffield CDAS for organising this demonstration. 3 reasons to show our solidarity”

There is only one world and only one human race. We must stand together.

Green activist Graham Wroe told the story of the recent campaign to free Annociate Nimpagaritse from detention and prevent her from being deported to Burundi. You can read more about the campaign on the Free Annociate blog.