Stand up against the threat of Privatisation! 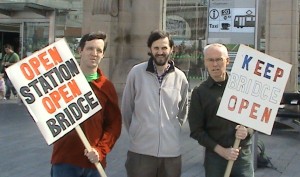 It was great to be part of the gathering of Residents Against Station
Closures (RASC) before the station barriers planning application was thrown
out. The campaign has shown that Sheffielders care about their communities
and their city and want the Council to the same.

We must not overlook, however, that it was only listed building status that
allowed Councillors to have a say in what happens. Privatisation and central
government guidelines for the private companies running our railways have
stripped the Council of any other power in this.

This city needs to support pedestrians, cyclists and users of public
transport. There must be access to the city for local people, pedestrians
and the disabled, not just car drivers. And we should have access to public
spaces which we paid for and East Midlands Trains do not own !

This campaign has been about standing up for our city and our communities
against the threats of privatisation and central government dictating to us.
A small victory has been won but there are many battles ahead.