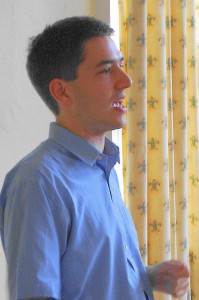 The national deputy leader of the Green Party spoke out in Sheffield this weekend against the cuts both nationally and in the city.

Speaking at the national conference of Green Party councillors, Adrian Ramsay argued that the coalition Government’s June budget and the imminent significant budget cuts in Sheffield are neither necessary nor fair, despite claims to the contrary by the Tories and Lib Dems nationally; and by the Lib Dem leader of Sheffield Council.

Adrian Ramsay said “The budget was a failed opportunity to create a more stable and fair future for the UK. Despite what the Government claims, this level of savage cuts is neither necessary nor fair. Progressive tax reform and action to tackle tax evasion and avoidance could raise tens of billions of pounds a year, which could be used to develop a better economy.”

He also argued that the Coalition’s budget announcements on VAT, benefits cuts, a public sector freeze, and swingeing cuts in most government budgets, were far from fair.

Adrian Ramsay went on “Since the budget 3 weeks ago, the independent and highly-regarded Institute for Fiscal Studies has demonstrated that the budget will hit the poorest people hard. And the outlook looks gloomy too for women, for young people, for people with disabilities, and for people without jobs.

“Instead, what the country needs is a ‘Green New Deal’. A major investment package to rapidly modernise the UK economy for a low-carbon future. That would mean jobs in local manufacturing, green industries and local food production. The Greens will continue to press that message, both in Sheffield and elsewhere.”