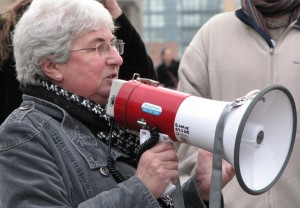 From Sheffield City Council Website
It is with great sadness that we can inform you that Cllr Jan Wilson passed
away on Monday evening (August 2).

Jan asked for her thanks to be given for all the help and support she received
from friends, colleagues and many, many well wishers over the time she has been battling cancer.

John Mothersole, Chief Executive of Sheffield City Council said: “We are
deeply shocked. Jan will be sorely missed. She was an inspiration to us all. She was totally committed to working for Sheffield and was recognised for her dedication by being awarded a CBE in 2006. Her work with Yorkshire Forward was also celebrated. As well as being admired and respected locally, she was also much admired regionally and nationally.”

The following tributes have been made by Sheffield Green Party members. Please add your comments below.

I’ve been thinking about what qualities Jan had that meant we had a good working relationship despite our political differences. She was very clear, consistent, honest, reliable. She worked for the good of the city and her party, never sought the limelight for it’s own sake or to promote

herself. So she was known for her works rather than her personality. And at a personal level, she was always respectful, accessible, generous with her time. Right at the beginning, when I was on my own in the council, and unlikely to be able to get anything through Full Council, she helped me get the issue of water fluoridation debated (by bringing it to a Scrutiny council). And then in the balance of power year, there was sufficient trust that we could work on a case by case, “no surprises” basis, which survived even our differences over the Wisewood School closure, and working together on budget proposals, which was a big political risk for us.

She has been a pillar of strength in the council. Absolutely amazing that she only resigned from being leader of her party a couple of weeks before she died. She must have been much, much more ill than we realised. She said she would be a hopeless patient and was much happier working to the very end.

Just wanted to say that although I hadn’t seen her recently Jan Wilson was
a colleague and friend of mine from the days when I was an unpaid worker at Sheffield Debt Support Unit.

I’ve always had a really good working friendship with her. She was a great
woman with a down to earth approach to life, passionate about politics and
Sheffield. I learnt loads from Jan during the time we worked together.

I know  she will be missed by many people and especially by  her partner Nick and her two children. 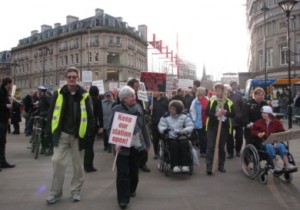 I always admired Jan for her hard work and clear desire
to improve the lot of ordinary Sheffielders. However I didn’t always agree with her, so stood against her in the local elections in 2010,2006, 2002, 1998 and 1994 and always found her a fair opponent. She campaigned positively for what she believed in and worked tremendously hard for the local community. In the last two years I have worked alongside her campaigning to keep Sheffield Station bridge open to the public.  Jan  did much of the work to secure the improvements to the station when she was leader of the Council, including the new accessible bridge that EMT are now trying to block. I am sure I speak for all the RASC campaigners when I say Jan will be sorely missed.