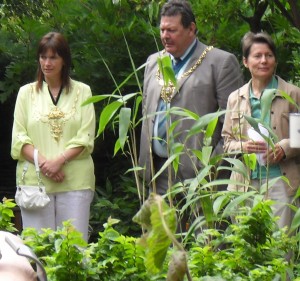 Cllr Jillian Creasy acted as master of ceremonies for a ceremony to mark the 65th Anniversary of the bombing of Nagasaki. It was held in the Japanese Garden at Meersbrook Park and attended by about thirty people. The Lord Mayor, Cllr Alan Law, had previously signed the Mayors for Peace declaration and spoke movingly about a young Japanese visitor to Sheffield who had personally thanked him for Sheffield being signed up to this international movement. His daughter, Nicola, who is acting as Lady Mayoress, laid flowers by the cherry tree in memory of the hundreds of thousands who died in Hiroshima and Nagasaki in 1945. Green Party member David Garlovsky read out a personal message from the Mayor of Nagasaki. There was a minute’s silence, then a song and a poem read by local performers. Cllr Creasy ended by thanking CND for their continued work, especially around trying to persuade politicians to stop Trident. The ceremony, which had been organised by Sheffield CND, was very short and simple, but very moving. It was followed by a “peace picnic” in the walled garden, with people enjoying the sunshine, music, more poems and making paper cranes. 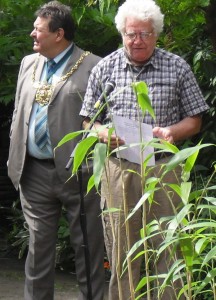