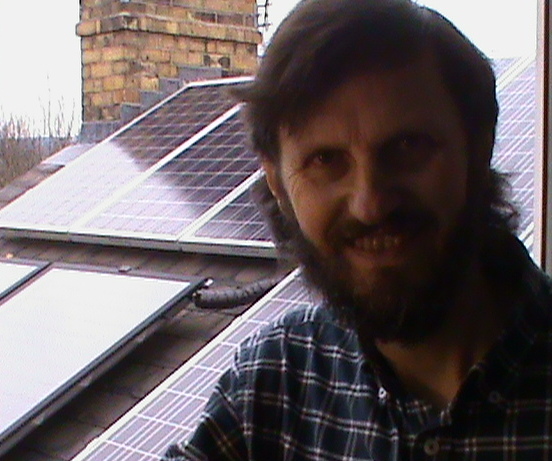 Manor Castle by-election candidate Graham Wroe comments : “I improved the insulation and installed solar panels on my house in 2009. My energy bills have been drastically reduced. Sheffield council can take advantage of the new rules to help many more householders do what I have done. It is an opportunity not to be missed. ”

Cllr Creasy comments : ” Our motion to council on September Ist urged the council to act quickly to take advantage of newly relaxed rules for renewable energy generation. The Birmingham scheme is Britain’s biggest proposal to date for retrofitting houses through an energy efficiency upgrade. It will provide 10,000 warmer homes and hundreds of local jobs in what could be a hugely beneficial industry if we have the courage to invest. Birmingham council have shown what can be done and we urge our council to follow up our successful motion with a costed plan before the end of the year. ” ENDS

The attached picture shows Graham Wroe and the solar panels on the roof of his house.

(a) welcomes the announcement by the Energy Secretary that, as from 18th August, 2010, Local Authorities will be able to sell renewable energy from all installations including those over 5MW to the grid;

(b) notes that every budget amendment put by the Green Party, since they were first represented on Sheffield City Council in 2004, has included proposals for investment in energy saving and renewable energy production;

(c) notes that, even before the Feed-in Tariff arrangements, such investments would have saved money for the Council and citizens, created local jobs and contributed to carbon reduction;

d) accepts that the financial case for saving and generating renewable energy is now even stronger; and

(e) therefore urges the Cabinet Members for Finance; Housing, Regeneration and Planning; Business, Transport and Skills; and Climate Change, to work together to bring forward a costed plan to the Cabinet within three months which will bring Sheffield into the same league as, for instance, Woking, Derby and Kirklees in terms of renewable energy generation.

3. The Green Party’s 2010 general election manifesto included a costed programme for £44bn worth of investment in a Green New Deal. See