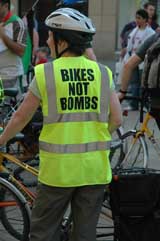 Wikileaks is to be congratulated for making public the dreadful state of affairs in Iraq. The 109 000 deaths that have been documented, including 66 000 civilians, should be properly investigated. The leaked documents show how US
authorities failed to investigate hundreds of reports of abuse, torture, rape and murder by Iraqi police and soldiers whose conduct appears to be systematic and generally unpunished. The files point to clear violations of the UN Convention Against Torture.

The allegations also involve British troops. Some Iraqis have been killed by indiscriminate attacks on civilians or the unjustified use of lethal force. Others have been killed in custody by UK forces and no one knows how many Iraqis lost their lives while held in British detention facilities. If unjustified or unlawful  force has been used, prosecutions for those  responsible should follow including those at the top who bear most responsibility . There must be a judicial inquiry to fully  investigate UK responsibility for civilian deaths in Iraq. Such an inquiry would be in the best interest of the west, as this unlawful behaviour currently helps the recruitment drives of terrorist groups around the world.