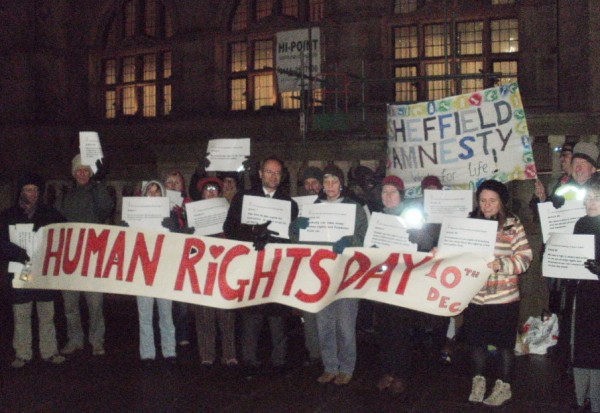 Councillor Jillian Creasy represented the Green Party at Sheffield Amnesty International’s vigil to commemorate International Human Rights Day . It was a lively affair attended by around fifty local activists, including David Blunkett MP, Paul Blomfield MP, and several councillors representing all three parties on Sheffield City Council. There were also members from Trades Unions, local churches and refugee groups. The world wide Human Rights day theme this year was “Speak up, stop discrimination.” There was a candlelit reading of the articles of the Universal Declaration of Human Rights by Amnesty International member, Alex Jagger. Leaflets were handed out to those passing by Sheffield Town Hall. Even though in 1948 the nearly all the world’s countries supported the General Assembly of the United Nations adopted and proclaimed the Universal Declaration of Human Rights, human rights abuses are widespread across the world. The avowed good intentions of the world’s governments must be backed up by good practice. Sheffield Amnesty International will continue to speak out against injustice and inequality and demand a future where all people will be free and equal in rights and in dignity.