Accounts of the march 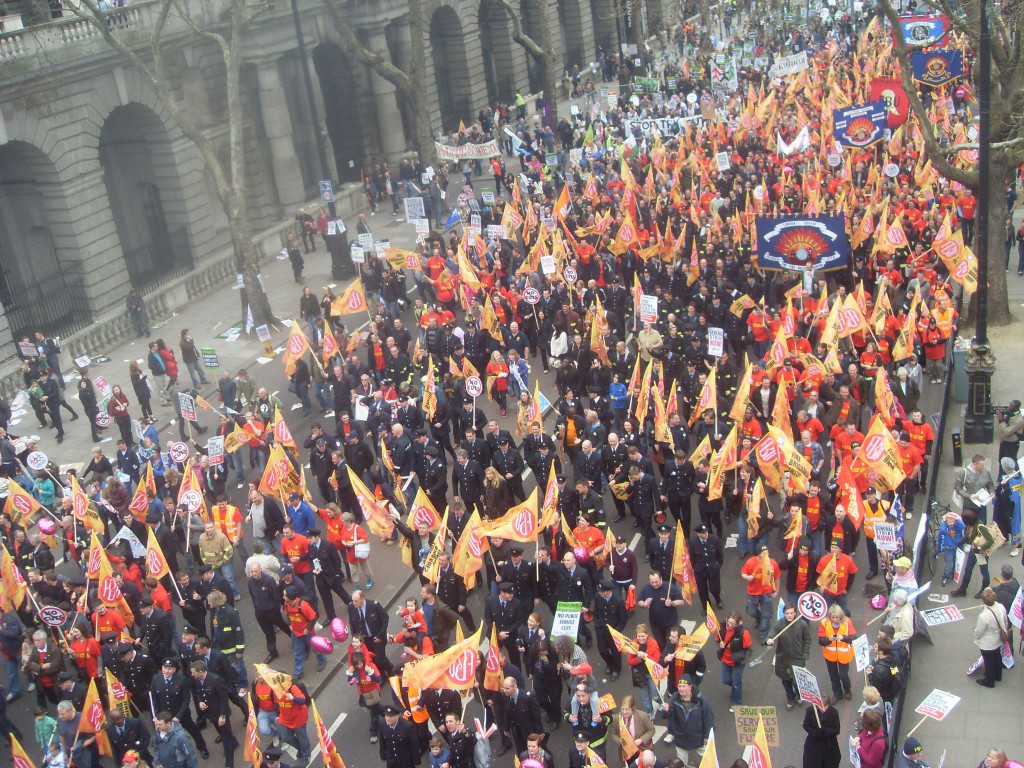 On the coach to London I sat next to someone working for the council who said she was going part-time as a result of the cuts. Rachel sat next to a man who said that his organisation had decided to look for reasons to sack people rather than make them redundant. Everyone has their reasons for marching.
We arrived at Wembley at around 11am. I was astounded at the number of coaches already there, and tried to photograph them, but it didn’t come out too well. We collected our placards and, along with hundreds of others, made our way to the tube. We were informed by tannoy to purchase our tickets at the other end. At the other end – Waterloo, in our case – we were waved through the barriers without having to buy a ticket. This no doubt helped everyone concerned; just imagine the inconvenience to stations, police, ordinary passengers, and protesters alike, of those huge queues.
None of us is familiar with London, so we took some time to orient ourselves and get moving. We grabbed a coffee on the way, crossing Waterloo Bridge just before midday. Our first glimpses of the March were awesome; to the right – the back of the March – all the way back to Blackfriars; and to the left, all the way up to the Houses of Parliament, all that could be seen was a slow moving line of waving banners. As we crossed the bridge, we were overtaken by large groups of protesters, some with large and weird wheeled contraptions, one a samba band (who were absolutely brilliant), all in high spirits. As we came level to the point where the march passed underneath the bridge, the FBU were marching past. It was a magnificent show, smart uniforms and colourful banners, and immense, too.
Then we were into a pre-March march, moving along The Strand and Fleet Street before turning down a side street to get to the Embankment and join the March proper. The going was slow; red buses stood stationary as if left there deliberately to funnel the huge crowds. And even here, they were huge. And they came from all over the place; North Lanarkshire, Exeter, Nofolk, Birmingham, Tooting, Glamorgan. And the banners were beautiful, purples and pinks, greens and blues, red and yellows; large and small, all shapes, each one representing the fury of the carriers, and those they represented but who could not be there, at the cuts. Political parties – lots of Greens, by the way, either singly or in groups, like ours – including the Labour Party , the SWP, and the Communist Party. Not being biased, but I reckon there were, certainly in our section of the March, more GP banners and placards than from any other party. There were plenty of other organisations represented, though; Ministry of Defence TUs, Revenue and Customs TUs, PCS, Unite, Unison, FBU, Robin Hood Tax (as Rachel was OUR Robin Hood, we were able to make contact with others, at times looking like it was a Robin Hood convention), Stop The War, Anti-Cuts Alliances from all over, UKUncut, Tax Reform Group, Mind…
Every one of them has their reasons for marching.
Finally we reached the March, at Blackfriars. It was already 1.10 pm. The Embankment isn’t a narrow street, and they hadn’t blocked it using buses. It was packed, difficult to move about in; a slow shuffle was occasionally the best you could muster, and only in the direction everyone else was moving in. Nevertheless, we made contact with a number of different Green Party groupings there, from Brent to Derbyshire, and Jillian was able to have some really good conversations with many of them.
The noise varied from loud to earsplitting (especially as we passed under the bridges), but never threatening or ugly, and was often punctuated by the distant strains of the samba band. Parents pushing prams walked alongside energetic pensioners and even more energetic teenagers, people in wheelchairs. There were people of all ethnicities marching, and I heard many languages spoken, some of which I recognised (French, German, Italian), and some of which I didn’t. Competing chants rose and fell, some with simple and repeatable words (CleggyCleggyCleggyOutOutOut), some a little more complex, with unrepeatable words (bonfires ring any bells?). We enjoyed those.
At various points along the way were special interest stalls (Stop the Libyan Bombing, Troops Out of Afghanistan, etc), and at one stage an intriguing group dressed as greedy Banksters… 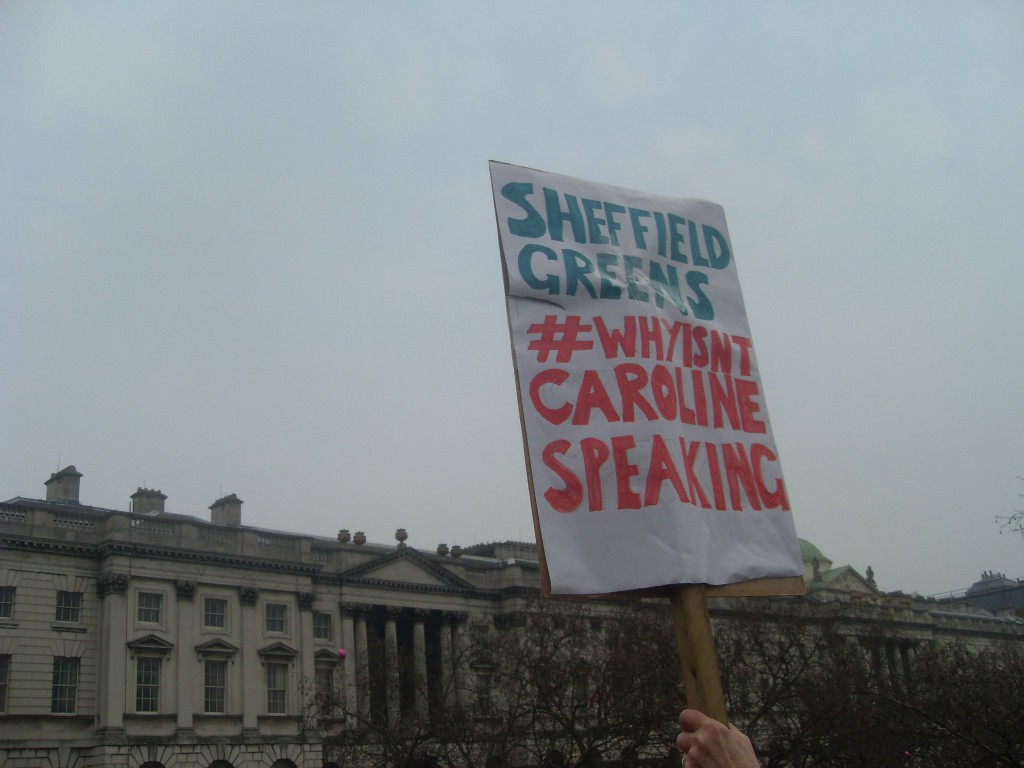 Great creativity was apparent on the placards; my favourite was “Dave; bringing you unfunny repeats of the eighties”. I’d been controversial on mine, putting #whyisntcarolinespeaking, referring to the refusal by the TUC to invite Caroline Lucas to speak at Hyde Park. There had been a lot of letter writing and twitter activity in the week leading up to the March (in which I had taken my full and indignant part), hence the hashtag. We had a few people approaching us about it, and, when it was explained, they were all outraged by the TUC’s action, and one even said he would write to them to complain.
It became apparent to us at about two o’clock that we weren’t going to make it to Hyde Park, and by three o’clock, just by the Houses of Parliament, we decided it was almost time to go. The samba band was there, and we stopped to boogie to the beat. Just as we were about to leave the March, a young man in a smart suit approached Jillian; he was from the BBC, would she mind doing an interview about her reasons for marching? We didn’t realise it was going out live. After Jillian had done hers, Bernard had a go, too. Brilliant. It wasn’t until we were back on the coach (and Bernard found his mobile) that we discovered Anne had watched it!
I haven’t said much about the police, and that’s because, until this point, we hadn’t really come across them. There were quite a lot at Westminster, looking very stern, thumbs hooked in heavily-laden belts. But as we left the March, we decided to ask the nearest one (lots to choose from) the way to Green Park tube station. He hadn’t a clue, so we set off, following a sign that looked as if it might have been bent out of kilter. Along Victoria Street, there were lots of police vans, loaded with police, with doors open. In one sat a drowsy officer, head down, snoring gently. Rachel and I were itching to get a photo, but discretion, etc. After another abortive consultation with more officers (who were looking very suspiciously at our masked Robin Hood), we were able to find our way to the tube station, and got back to Wembley just before 4.45 pm. We missed all the excitement on Picadilly, even though the tube station was there. 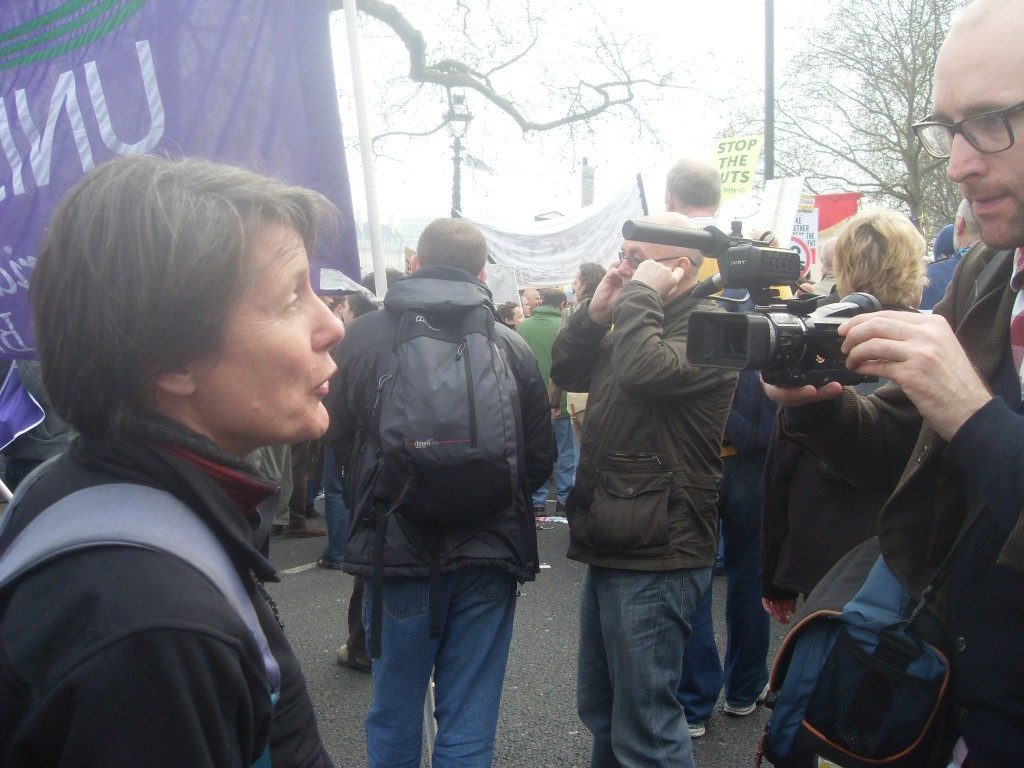 The main impression for me was the sheer numbers on the march, the carnival-like atmosphere (bands, chants, banners, placards), the variety of people (young, old, families, work groups, disabled, smart, scruffy). Yes, the TUC had organised loads of coaches (very well!) and got people down there and it was “their” day, including making a platform for Ed Milliband even though he is in favour of cuts. But there were a strong sense of individual spontaneity as well with lots of home made placards and lots of people representing those who will suffer from loss of services as well as loss of jobs providing them. And it was MUCH bigger than the TUC predicted.
My experience was mostly queueing to join the march (took over an hour from when we crossed Embankment over Waterloo Bridge to be directed via the Strand and Fleet Street to the back of the march) and then, once we did join the main march, only getting as far as Houses of Parliament before it was time to head back to Wembley for the coach. So I never got to Trafalgar Square, let alone Hyde Park. But very uplifting to be part of such a massive protest.
Jillian

There is One Response to Accounts of the march

The live BBC shoot was excellent, and Peter you wasn’t missed hidign behind Jillian and Bernard. It was great to see you guys; I would have loved to have marched but not sure how my legs would take it. A great account! Thanks for going there.