Sheffield Green Councillors are stepping up the pressure on the Labour Administration to keep to its word on 20 mph limits in residential areas without humps and bumps.

Cllr Rob Murphy is putting a motion to the September meeting of the Full Council, which shows Labour’s piecemeal approach beginning with areas around Infant and Junior Schools would not be cost effective and would lose benefits of default scheme.

Cllr Murphy commented “We want Labour to stand by their word and bring in a default city-wide scheme as soon as possible. A 20 mph limit without humps and bumps would save lives and save money.’

He added ‘ Road safety research shows the school journey is not high-risk especially for young children and we believe a city-wide scheme should begin in the areas with the worst accident statistics.” 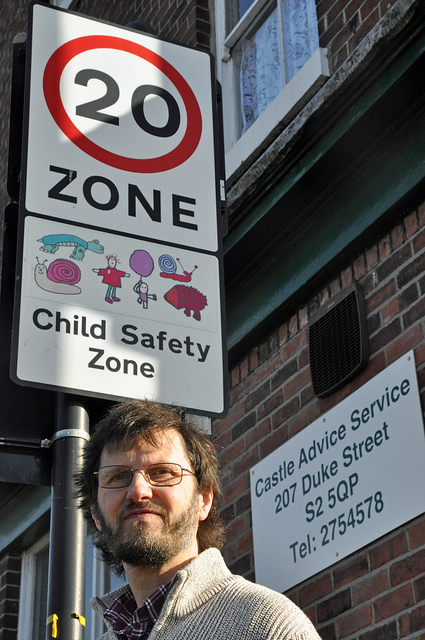 Note : The proposed motion text is :

a) Notes the Council Resolution of 2nd February 2011 which included :

which was supported by members of the current Administration.

(b) Notes that according to the AA Foundation for Road Safety Research very few accidents occur outside school itself and for children under 11 the journey to school does not constitute a high risk. Secondary school children are at much greater risk but still less than 20% of child casualties occur on the journey to and from school.

(c) Believes a citywide default 20 mph speed limit on residential roads has a number of benefits over a piecemeal approach, from removing uncertainty for motorists to ease of installation and greater impact on road casualties.

(d) Resolves to bring in a default 20 mph limit in residential areas and begin a city-wide roll out with the areas suffering the worst accident statistics.