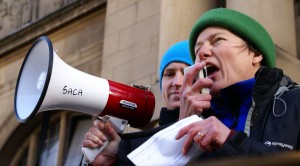 Jillian Creasy spoke at the Rally for Occupy Sheffield, speaking out for Surestart, she said that “Women must fight the cuts!” The full text of her speech follows.

The Coalition cuts, now supported by Labour, will affect women worst. I want to speak up for women – as paid & unpaid workers, as mothers, as elders.

There is One Response to Occupy Sheffield Rally – Let’s Emasculate Capitalism!

There are a lot of male public sector workers worried about their jobs as well. If you’re 53/54-just too young to take advantage of early retirement schemes it is particularly worrying! could end up unemployed-unable to take pension when other people hitting 55 next year could take it, people like me wouldn’t get it until 60.

Agree though there has to be something better, scrap Trident, pull out of Afghanistan, tax Bank Profits etc