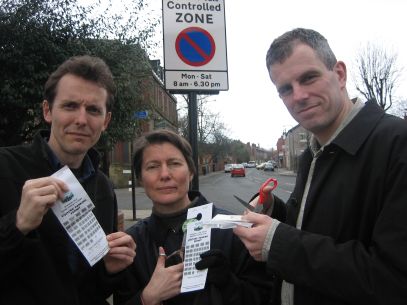 Permit Parking Zones initially used charges for permits to pay for the installation and enforcement of the schemes. As more schemes were installed these charges began to make a profit and this was discovered by the Star in 2009.

In the 2009 the Green Party council budget amendment included a 50% cut in the prices of permits pending a review of the pricing of the permits. This was rejected by both of the other parties (including the Lib Dem administration). Labour (in particular Paul Blomfield) later joined our campaign for a cut in prices.

In the 2010 council budget the Lib Dems cut the price of permits to £10 in all zones except those inside the inner ring road. Green Councillors campaigned in support of residents and businesses in the city centre who have to a much higher price for permits (£50-100).

In the 2012 council budget Labour proposed large increases in the price of permits. Standard permits up 100%, visitors permits up 300%, etc. The Lib Dem amendment reversed these changes, but only the Green Party amendment said no profit should be made from Permit Parking schemes. Our proposal would have meant a cut to permit prices. The Lib Dem proposal would have meant over £250 000 profit being made from the permit schemes.

At the Full Council meeting on 4th April 2012 the Liberal Democrat group proposed a motion calling on the Labour Administration to stop the prices rises, the Greens proposed again that no profit should be made from the schemes. This time we were supported by the Lib Dems but voted down by Labour.

The Greens say it is unfair to make a profit out of residents living around the city centre vulnerable to parking problems. These areas include some of the most deprived in Sheffield. Labour are effectively imposing a tax on living and running a business in these areas and the Lib Dems policy has been inconsistent.

Although many people in these zones do not own cars they still require visitors permits to access the services taken for granted by other areas eg social services, builders, family visits, etc.