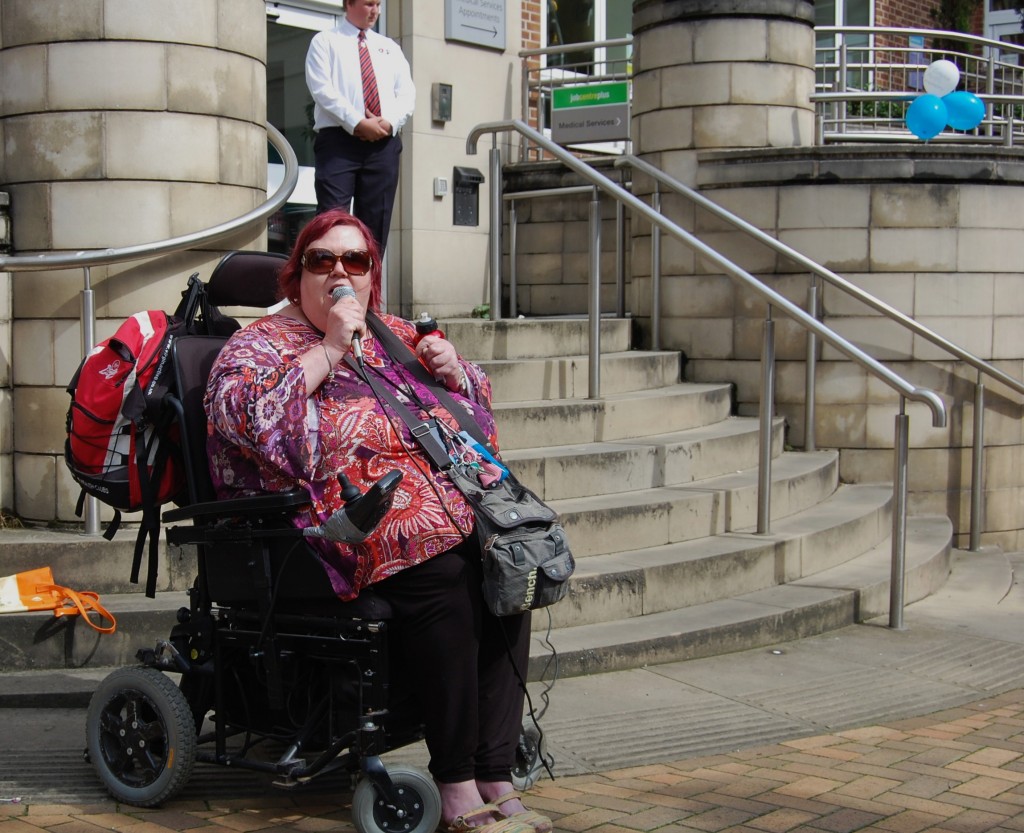 Sheffield Green Party is actively supporting the Tuesday 28th August rally in Sheffield city centre protesting about the welfare changes and cuts introduced by the coalition government and its partners like Atos.

Green Party member Alison Hayward said “These changes make life much harder for disabled people like me. I and many others will be attending the rally to oppose them. I hope lots of people will join us.”

The picture shows Ali Hayward speaking on behalf of the Green Party.

UKUncut Sheffield have joined forces with Disabled People Against the Cuts (DPAC) to make sure it’s Games over for Atos during the Paralympics.

This recent episode of BBC’s ‘Panorama’ – ‘Disabled or faking it?’ –  reveals the shocking truth about Atos and their contempt for the rights of sick and disabled people.

That’s why at 12.30pm, Tuesday 28th August we will be paying a not-so-little visit to our local Atos office in Sheffield…

We are calling on ALL disabled people, disabled activists, families, colleagues, friends and supporters in and around Sheffield to come together and fight back against Atos’s attacks.  Atos represents as dangerous an opponent as any government, law or barrier the disability movement has faced in its long history. It’s not just welfare, but our very identity and our place within society that is under attack; that’s why we need as many people to come forward to help us build a great action that Atos will take notice of.  We want people to come forward to help plan the day, to be spokespeople, to talk to interested media, to talk about their experiences with disability and to talk about their experience with Atos.

And we are asking the whole of the anti-cuts movement to join us in our opposition to the company most responsible for driving through the government’s brutal cuts agenda.

You are probably angry, frustrated about what is happening in our country.  But you do not need to feel despair because by joining forces with others in an effective way you CAN force the change we want to see to happen.

We’re not against the Paralympics or the people taking part in it. We’re highlighting the hypocrisy of Atos, a company that soon may be taking disability benefits from the people winning medals for Team GB.

Atos Origin are the French owned IT company who have a £300 million contract with the ConDem Government to continue carrying out ‘work capability assessments’.

It is claimed assessments are to test what people can do rather than what they can’t. The real purpose is to strip benefits from as many people as possible.

This testing system has already led to people with terminal illnesses and severe medical conditions being declared fit for work and having benefits cut. GP’s are ignored in favour of decisions made by Atos Origin’s computer.

Plans announced for the scrapping of Disability Living Allowance have also revealed that this intrusive testing is likely to be extended to everyone on some form of disability or health related benefit.

To date around 40% of appeals against Atos Origin’s decisions have been successful.

But Atos have now extended their harassment of sick and disabled by using legal threats to silence websites which have been critical of them: http://johnnyvoid.wordpress.com/2011/08/22/atos-origin-vs-the-internet-stop-atos-censorsing-the-web/

Atos are spearheading the government’s attacks on welfare provision. This is about making vulnerable, sick and disabled people people pay for a crisis they did not cause. It’s about making disabled people pay, instead of super-rich tax dodgers who cost us up to £120billion every year. This is an ideological attack on the welfare state; these cuts are a political choice.

Ever since George Osborne announced he was slashing £18 billion from the welfare budget, the government has paid Atos £100 million a year to test 11,000 sick and disabled people every week, then decide whether they’re ‘fit for work’.

Atos uses an inhumane computer programme to do the testing, and trains its staff to push people off benefits. The government has admitted the tests are flawed, and the British Medical Association wants them to end immediately.

But Atos continues to devastate people’s lives. Many have committed suicide because of its testing programme, and over 1,000 people have died of their illnesses soon after being found ‘fit for work’.

We won’t let them get away with murder, so join in The Atos Games however you can – online, on the phone, or on the streets! Here’s what’s coming up…

· Tuesday 28th: Pay a visit to your local Atos office – and maybe even take your protest inside!

· Wednesday 29th: A coffin full of your messages about Atos will be delivered to its doorstep.

· Then on Friday 31st, join us in London where we’re teaming up with UK Uncut for the Grand Finale – an audacious, daring and disruptive action.

Last time we shut down Oxford Circus, this time we will be performing miracles…!

This is an excellent chance people in Sheffield to join forces, to expose the sickness at the heart of our country; inhumane unfairness and inequality caused by greed, arrogance and apathy.