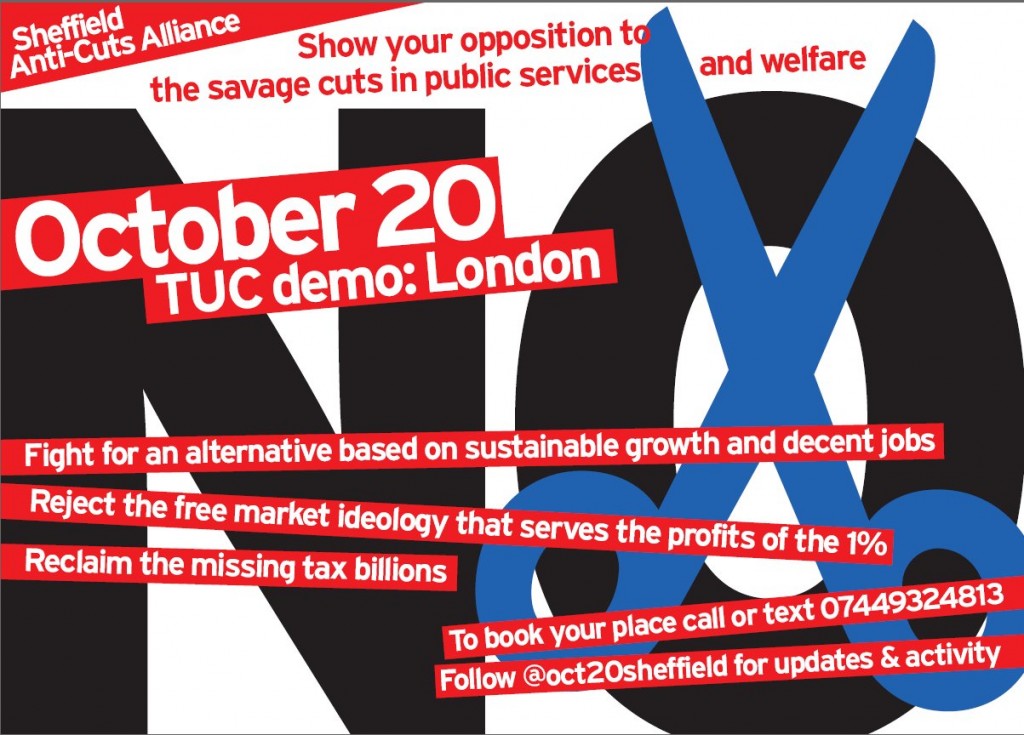 There will be a public meeting jointly called by and Sheffield University Students Union
and Sheffield Trades Council as part of the anticuts campaign:

Saturday 20th October: March for a Future that Works

Join the big TUC march in London on Sat 20th October to send the message that austerity isn’t working – we need to invest in jobs, public transport, renewable energy and affordable homes. Coach tickets from Sheffield are £10 waged or £5 unwaged – to book your place call or text 07449 324 813 – more info http://afuturethatworks.org/ or ‘London Calling’ on Facebook.

There is a Climate Bloc on the TUC demonstration on Oct 20th. The initiative came from a meeting organised by Climate Justice Collective and attended by the chair of the Campaign against Climate Change Trade Union group and aims to positively support the aims of the TUC demonstration and raise the profile of Climate within the call for a future that works.

We will march under the slogan:

‘For a Future that doesn’t cost the Earth,

Against Austerity and for Climate Justice’

We are joining the TUC march on 20 October to be part of a huge popular challenge to austerity and the misery and hopelessness it is creating. We will march together on the 20th to raise the crucial question of tackling climate change and reducing greenhouse gas emissions as part of A Future That Works. Dealing with these issues together is possible, necessary and desirable. The climate is changing dramatically, and we are already seeing huge impacts.

Meet 11.00 am at St Paul’s to assemble before joining the 20th October March