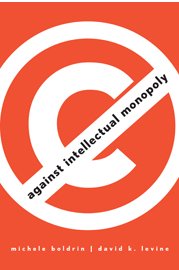 Against Intellectual Monopoly by Michele Boldrin and David K. Levine

Have you ever stopped to wonder whether laws to protect ‘Intellectual Property’ – that is ‘Copyright’ and ‘Patents’ – are actually doing the job they are supposed to be doing?
Does the Copyright law, granting a more-than lifetime monopoly on all music, art, writing and film created, actually increase the amount of creative works in society? Even if it does, are the restrictions placed on other people by these monopolies a reasonable trade-off in return for this extra creativity?
What about Patents? Has the historical addition of patentability to any given field lead to an obvious growth in the number of new inventions produced in that field, or are the intrinsic commercial advantages of being the first to invent enough of a reward for innovation? Again, are the benefits of these monopolies a reasonable trade-off against the initial barriers to innovation that patents require (anyone wishing to improve on a currently-patented technology must either wait for the patent to expire or strike a deal with the patent holder to license the technology in question)?
This book attempts to answer some of these questions by looking at evidence, both within modern and historical data, to see if society would be better off without any form of Intellectual Property laws. Whilst some areas appear to me to be a little weak – the effect of zero-cost digital redistribution of books, music and film seems to get fairly quickly brushed over – much of the evidence presented makes a compelling case for the abolishment (or, at least the severe restriction) of both Copyright and Patent laws.
Against Intellectual Monopoly can be freely downloaded in PDF format from http://levine.sscnet.ucla.edu/general/intellectual/againstfinal.htm (last updated 2008). It is also available as a paperback book (published 2010, based on the 2008 hardback edition).  This review is based on the PDF version.
Davo Smith