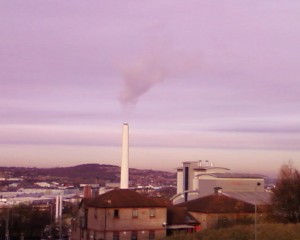 Many helpful and sensible comments have been made in response to the planning application for permission to import 15,000 tonnes of extra waste into Sheffield from Nottinghamshire, Derbyshire and Yorkshire.

I am not opposed in principle to importing waste to make up the shortfall in waste arising in Sheffield, provided that the imported waste is moving up the hierarchy, is not displacing other waste to landfill (for instance non-recyclable commercial and industrial waste) and that it is done in the context of a regional waste strategy. But the applicant is seeking a large increase from a very wide geographical area. This would increase the number of heavy goods vehicles in the area, which already falls below acceptable air quality standards. I therefore object to the application, unless the applicant is prepared to build a rail and/or canal link to the Bernard Rd site.

I am a community representative on the Energy Recovery Liason Group.I object to the proposal as I am not satisfied that the shortfall in waste arisings to run the facility at full capacity cannot be met locally . A regional waste strategy is in my view needed. I do not regard Newark & Sherwood Distrct, Ashfield, and Amber Valley to be local neither is the Southern part of Derbyshire Dales.
If after full consideration it is deemed necessary to import waste from the wider region then I would only support the proposal if transport by canal and rail were considered. With rail in particular the site is adjacent to the freight line that leads up to Stocksbridge. The facility is past the junction with the Sheffield Lincoln passenger section . Currently that section of line is single track but prior to the closure of the Woodhead route in 1981 it was multiple track with sidings so there is ample space to put in a dedicated siding. The line is on an embankment immediately adjacent to the facility with no road to be crossed so it should be possible to design a system to transfer the waste into the plant without transferring to road. Although initially costly I suspect that as recycling rates increase there will over the next 10 yearsago there will be an increased need to import more waste. If Sheffield were to reach recycling rates of 50% or more which I hope it does then there would be a significant shortfall compared with the current situation

I write on behalf of Sheffield Friends of the Earth to express our objection to Veolia?s current application to vary Condition 3 of permission 01/10135/FUL.

In 2001 Sheffield Friends of the Earth warned of the forthcoming change in European waste legislation. This would lead to much higher recycling rates and mean that within a few years there would not be enough waste to feed such a huge incinerator. Sheffield Friends of the Earth recommended that if the incinerator was to be built the size should remain the same i.e. 125,000 tpa. We were assured by Onyx that it would not be necessary to import huge amounts of waste and Condition 3 was written allaying our fears. Now we read ?Of the ERF?s 225,00 tonne per annum permitted capacity, only approximately 110,000 to 115,000 tonnes of MSW and 50,000 to 55,000 tonnes of C&I[commercial and industrial] waste are likely to be available year on year from within Sheffield.? This phrase, on page 43 of the Supporting Statement shows that a 125,000 tpa facility would have been sufficient and recycling rates would have improved earlier due to pressure to reduce waste.

I will not expand on the greater value of recycling waste rather than burning it. This is shown in the waste hierarchy. It is possible to recycle up to 97% of household waste so clearly much of the waste reaching the incinerator could be more usefully dealt with. The UK uses 2.5 planets worth of resources and the burning of waste must surely be one of the most decadent acts currently taking place. Without the reuse of our resources we continue to use too much of the world?s cake.

We have the following particular points to make about this application:-

More comments are at: