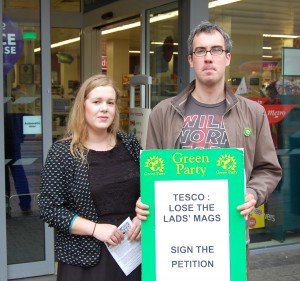 Sheffield Green Party members took part in the protest on 24th August 2013 outside the Tesco Metro store on West St to protest against their stocking of Lads’ Mags.

“These magazines portray women as sex objects. This kind of publication encourages sexist attitudes and behaviour, and has no place in a modern society.”

“We believe in a fairer world, including greater equality between women and men. It was good that a number of men took part in Saturday’s protest, to show their support for this campaign against lads’ mags.”

Protesters picketed a Sheffield supermarket in a bid to persuade Tesco to remove lads’ magazines from its shelves. Students, staff from both Sheffield universities and Green Party members waved placards outside Tesco Express on West Street in the city centre, demonstrating against the sale of the publications, which they argue are sexist towards women.

The protest was one of several around the country, and followed a warning from the groups UK Feminista and Object that shops face the prospect of legal action if they do not stop selling magazines such as Nuts and Zoo. The two organisations have joined forces with lawyers who argue the magazines’ photos of scantily-clad women could constitute sexual harassment or sex discrimination under the Equality Act, offering a potential basis of legal action for workers.

Sheffield University graduate Kat Banyard, director of UK Feminista, said: “Lads’ mags aren’t just a bit of harmless fun. By portraying women as sex objects they fuel sexist attitudes and behaviours. It is a scandal supermarkets and high street shops stock these publications. The good news is customers and employees don’t have to put up with it any more. Legally as well as ethically, lads’ mags are well past their sell-by date.”

Tesco says it has introduced measures such as restricting sales to over-18s only, and ensuring the magazines are placed on the back tier of shelves.

There are 2 Responses to Lose the Lads’ Mags

Rather than spending time over lad mags you should concentrate on more important issues?
Like family welfare? How do we as children prepare to look after our parents?

We do! The Green Party campaigns on a very wide range of issues. See articles videos on the website and pictures etc. on facebook.I personally campaigned against lads mags and page 3 etc. over 30 years ago, to me it’s unbelievable that we still need to campaign. We still get in some newspapers articles about violence against women, next to pictures that show women as objects not equal human beings. Whilst sexism isn’t what it was 30 years ago, it’s still there with all its consequences, and low regard for all the roles seen as “womens work” such as parenting, caring. I think challenging sexism is important for all the reasons above.