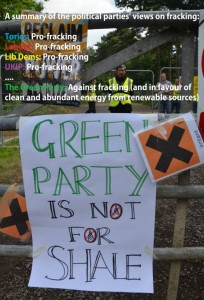 Green Councillors on Sheffield City Council won the full support of the Labour administration for their motion on fracking.

The motion refers to the evidence about the dangers of fracking, which involves pumping water at high pressure into the ground to extract shale gas. It also points out that, in the UK, it won’t even lead to cheaper energy.

The Green Party argues that it would be better to invest in energy saving and renewable energy which would help prevent dangerous climate change and create more jobs. Copies of the motion will be sent to local MPs and government ministers and help to swell the nationwide campaign against fracking.

“In practice, the council has little power to stop companies getting planning permission to drill in the Sheffield Region, but we can send a clear message that they are not welcome. And we can join the campaign calling on politicians at national level to oppose fracking.”

This Council believes it is completely irresponsible for the Government to be offering massive tax-cuts for fracking and this money should instead have been used to kick-start a major national retrofit scheme, which would reduce carbon emissions and bills and create thousands of green-collar jobs;

I am Currently in the process of setting up a working real life campaign group with support of Allied Workers Liberty. Against ucg. Fracking in Tyne and Wear and support any group anywhere that is involved in stopping these methods of extreme energy as it currently stands.
It is not democratic, It does not properly consult with people in and near the areas effected at all. It is not morally run, in the sense of pro-frack lobbyists within the current government and their involvements in the businesses, nor the fact that these companies/corporations doing the drilling operations are self regulating. I really do not think this is a good positive thing. And quite frankly it is a danger to our environment and ecology

I am incredulous that a city once involved in the coal mining industry would wish to be against another form of mining that could enrich this country enormously. I’m thinking of setting up a pro-fracking movement to campaign against those who wish to deny to this country the jobs and prosperty that fracking can bring and to combat their lies wherein they claim fracking is about 100 times more dangerous than it actually is.

Invest in renewables? It has obviously not occurred to anyone that 25% of our total energy consumption is our domestic gas heating. There is NO renewable energy alternative to that, so we can either send all our money to Russia and Norway for gas or we can mine it here. It makes no logical sense to oppose fracking and I think people should stop being so ideological.