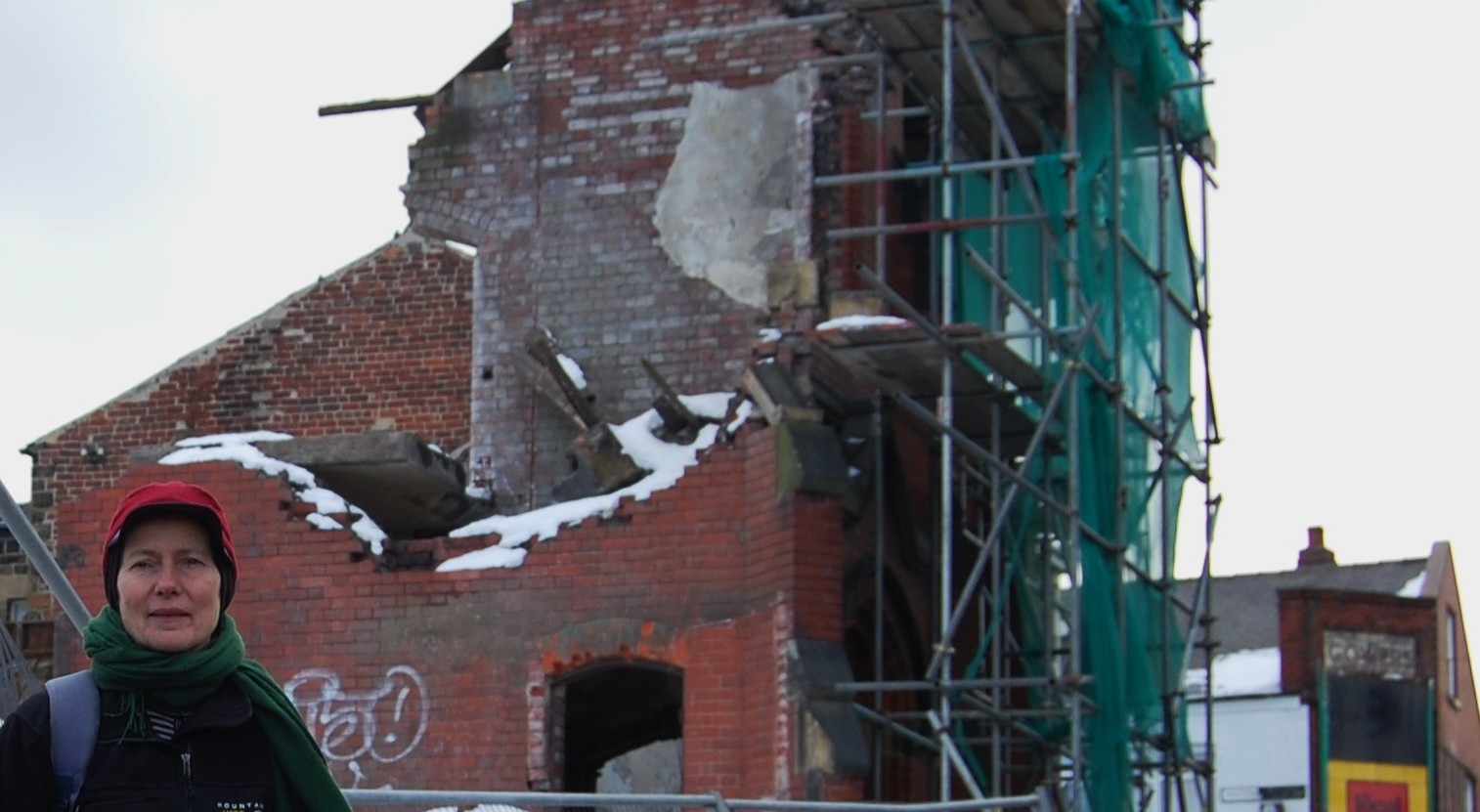 Green activists have been working with local shopkeepers, residents and Sharrow Community Forum to protest against a proposed development on the old St John’s Methodist Church site on Sharrow Lane. Sarah Jane Smalley, resident on Langdon Street said, “There are many reasons to object to this development; the biggest being the impact on traffic congestion and parking and how it will affect our existing long-standing retail community.

I have put in a detailed objection, which is published below.  I’ve spent a lot of time and effort on this campaign because I care deeply about Sharrow.  I am extremely concerned that the developer who has put in this planning application has no interest in our local community – in its development or ongoing sustainability. “ There is still time to lodge an objection; but not much!  Either on the website: http://planning.sheffield.gov.uk/publicaccess and searching for planning reference number 13/03495/FUL or by sending an email to planning@sheffield.gov.uk quoting this reference number and ‘Resubmission of 13/00103/FUL’.

Please do so by Monday 18th November. Sarah Jane Smalley can be contacted by email on greensjsmalley@gmail.com14th November 2013

I am writing to object to the proposed retail development detailed above on the following grounds:

1/ Traffic generation and Parking and impact on congestion

4/ Impact on the local economy 5/ Impact on the diversity and character of our community   I am a home-owner on Langdon Street, which is one street away from the junction where the proposed development is being applied for.  I am also a Trustee of Sharrow Community Forum which is located next to the proposed development.  In addition, I have spoken with many of my local retailers, neighbours and other local residents and the vast majority of people do not support this development.

1/ Traffic generation and Parking and impact on congestion   T28 Transport Infrastructure and Development states that new development which would generate high levels of travel will be permitted only where it could be served adequately by (d) the existing highway network and that consideration of development proposals need to ensure that no new highway problems are created or existing ones exacerbated.   T22 Private Car Parking in New Development clearly states that development outside the City Centre requires developers to make provision for sufficient off-street parking to meet the needs of their development.  New developments will be expected to provide sufficient parking space within the site so that neighbouring streets are not obstructed.   The Traffic Generation and Parking report which has been produced for this development states the following:

Objection point 1.1: It is clear to anyone who travels along Abbeydale Road at peak times that there is an existing highway problem in terms of traffic overflow and congestion.  I object on the grounds that exacerbating existing problems on Sharrow Lane in the same way is not in line with T28.

Objection 1.2: These ‘similar developments’ on Abbeydale Road are in areas which don’t have parking permit schemes, neither are they within the area which football commuters use to park for Sheffield United matches.  In addition, there are a number of retail units with lay-by or off-road parking on Abbeydale Road, unlike on Sharrow Lane.  The road directly at the side of the proposed development also already has been narrowed and traffic calming measures put in place which evidence that there is a pre-existing congestion problem.  I suggest that this Traffic Generation Report has not taken the specific conditions of Sharrow Lane into consideration, that it is not alike enough to other similar developments and is therefore not valid.  I object on these grounds.

Objection 1.3: I reject that 1 vehicle entering the site every two minutes is “negligible”.  If there are only seven parking spaces for non-disabled users then clearly traffic will be backed up: if 15 vehicles turn up in a half-hour period then clearly many of them will be queuing for a space or will need to park on roads which are already congested and have parking problems.  I firmly believe that this demand will exceed the capacity of the Strategic Road Network and would necessitate further controls on access to roads such as additional traffic lighting/filter lanes etc.  There is not the capacity for this on Sharrow Lane.  I object on these grounds.

Objection 1.4: As stated in 1.3, the car-parking which is proposed will not be sufficient to meet the requirements of the retail outlet, thereby not meeting the demands of T22 above.  I object on these grounds.

Objection 1.5: Clearly deliveries would need to be made outside of retail hours to meet T22.  I do not believe an assumption can be made that this is likely, and were it to be so, it would create noise pollution during night-time hours.  I question how far in advance the car-park would need to be coned off and for how long a delivery would be taking place.  This could be a matter of hours.  I object on these grounds.

Objection 1.6: Having worked in both a similar sized retail unit (GT Shopper at Coal Aston) and in FMCG (for Proctor & Gamble on the Superdrug Team) and for L’Oreal Professional, I reject the assumption that small/medium-sized retailers can decide on the size of the delivery vehicles which provide their goods.  This is a logistics decision made by suppliers.  It is unreasonable to make an assumption that the occupier will be able to say that the largest delivery vehicle allowed will be a 10.35m rigid vehicle.  I object to this assumption.  As such, I am concerned that larger vehicles will need to stop in the road to make deliveries which will further exacerbate the congestion and parking issues detailed elsewhere.  I object on these grounds.

Objection 1.71: Working on an assumption that the delivery vehicle is a 10.35m rigid vehicle as per Figure 2 in the Traffic Generation and Parking report, then clearly the vehicle will have to cross traffic on both lanes.  It could possibly need to wait to get into the car park if the cones haven’t been able to be put in place in advance, and to cross traffic anyway on what is a busy commuter road.  The back of the vehicle will be up to the traffic lights meaning that it will back-up traffic and create congestion.  This clearly is not in line with T28 above.  I object on these grounds.

Objection 1.72: In addition to point 1.71 above, there is no Figure/Graphic in the report to elucidate how the delivery vehicle will navigate the Washington Road crossroads, where one assumes it will turn right to Ecclesall Road, or alternatively the Sharrow Head roundabout or the Wolstenholme Road roundabout in Nether Edge.  If one looks at the turning circle in the bottom half of Figure 2, it is clearly larger that the crossroads the vehicle is heading towards.  I suggest that this manoeuvre would be both difficult and potentially dangerous and will impact on traffic congestion once again.  I request that the further impact of the delivery vehicles on their onward journey be investigated if this application is taken forwards and the impact on congestion properly investigated.  As this has not been done, I object to the application on these grounds.   2/ Non-conformity with the UDP 2.1 Designation

Objection 2.1: The site of the proposed development is clearly designated as housing land within the UDP – not commercial/retail land.  I object on these grounds.   2.2 Impact on existing commercial district centre

Objection 2.2: The London Road Commercial District already meets the aspirations for a District Centre as described in policy CS34.  A new retail outlet would clearly impact on the viability and sustainability of this District Centre which challenges the Council’s own policy on protecting such centres.  It is also worthy of note that this District Centre is made up of many independent retailers whose livelihoods are dependent on local custom.  I object on these grounds.   3/ Health and Safety   Traffic

Objection 3.1: Clearly the increased congestion as set out above increases the risk of road accidents and, especially with an increased number of delivery vehicles, decreases visibility.  This impacts on the safety of a road which is within walking distance of a Sure Start Children’s Centre, two community centres, a Doctors’ surgery, nursery schools, and Sharrow Infant and Junior schools.  There are also a large number of cyclists (including me!) who use this area, especially as the bike route/lanes come up Club Garden Road onto Sharrow Lane.  Clearly the increased traffic and number of vehicles crossing lanes will increase the risk of accidents.   In addition, the proposed entrance to the site is 23 metres from a crossroads which will make it difficult for drivers to get a clear view of the junction before turning out of the car park.  These cars will all also be crossing a pavement, presenting a risk to pedestrians.  UDP policy T27 (b) states that consideration will be given to the danger presented to cyclists and pedestrians when considering planning applications.  I suggest that the proximity to the crossroads and the increase in traffic in general, and turning across the lane and pavement is a significant increased risk.  I object on these grounds.   Air pollution

Objection 3.2 Increased traffic means increased air pollution.  Air pollution is linked to low birth-weight in babies (Lancet 15/10/13[i]), respiratory conditions and asthma (cf Guardian article May 2013[ii]) and heart failure (cf BBC News article July 2013[iii]).  GE22 Pollution (p112) states that developments should be sited as to prevent or minimise the effect of any pollution on neighbouring land uses or the quality of the environment.  Increased traffic, and particularly the diesel engines of an increased number of delivery vehicles will increase air pollution in what is a designated residential area.  I object on these grounds.   Noise pollution

Objection 3.31 The increased traffic and increased number of delivery vehicles will necessarily increase noise pollution in the area.  From my house I can hear the traffic lights beep at the crossroads on Washington Road and Sharrow Lane.  I am therefore quite sure I will be able to hear deliveries being made just a further 20 metres down the road.   There is already noise pollution in the local area, some due to street drinking/drunken people in the streets.  I am concerned that a retail outlet of this size will be selling cheap alcohol and will bring increased traffic and issues to the area, both in general terms and on this specific point.   As per GE22 above, noise pollution will be increased and I object on these grounds (Objection 3.31 and 3.32)   4/ Impact on the local economy

Objection 5 Most of the small and independent retail stores in this area are run by the diverse ethnic groups that represent the people who live in this community.  They provide a broad range of ethnic goods which simply wouldn’t be available if these stores were no longer viable.  Further to this, many people love our local area precisely because we are made up of independently run businesses, representing a wide range of ethnic groups.   I object on these grounds.   I hope you can see from this letter that I have put a lot of time and effort into putting together this objection.  That is because I care deeply about Sharrow and our community.  I am extremely concerned that the developer who has put in this planning application has no interest in our local community – in its development or ongoing sustainability.  There isn’t a policy number to state or a statute to call on to make you consider this, but there is just being a human being.  Please don’t accept this planning application.  I don’t believe it’s the best thing for our community.

support local business – we don’t need another conglomerate on the door step.