Jillian Creasy – the week before Christmas

Monday 16th – Licensing Committee (again – the way it works is that there is a pool of councillors from which 3 are allocated to each subcommittee hearing; I have volunteered for quite a few in the last 3 months as I was unavailable over the summer). These were taxi cases, new cases or licenses being reviewed for one reason or another, but falling outside the criteria where officers can decide. It is hard knowing that taxi driving is or could be someone’s livelihood, but the test is whether they are a “fit and proper person”, i.e. safe to be serving the Sheffield public. In afternoon I met Flic, the woman who runs “Common People”, a group helping small businesses to open shops – often just short term “pop up” shops – in the city centre. Her vision of a liveable city centre with room for independent shops and businesses fits with that of the Green Party.

Tuesday 17th – meeting with a finance officer to talk about the council’s budget and the options for a Green Party amendment. The government cuts are horrendous – over a five year period Sheffield’s revenue spending will be cut from £190 million a year to nearer £100 million. The announcement of an (average) 2.9% cut to local authorities at national level doesn’t sound quite so bad, but of course the northern cities are faring worse than other areas and the amount of money where we have any flexibility is less than the total grant, much of which is ring fenced for big chunks of spending like education. This was followed by a meeting of the Central ward councillors, now led by Rob Murphy. We have a small amount of money to allocate by the end of this financial year (in practice we must decide by mid January) and are keen to spend it in ways which support the infrastructure of community groups. I did case-work until late in the evening, trying to clear the decks before Christmas.

Wednesday 18th – exciting official engagement: the deputy mayor of Hargeisa, the capital of Somaliland, was visiting the UK, and I’d helped community activists based at Israac, the Somali-run  community centre at the Vestry Hall on Cemetery Road, to organise a meeting with the Lord Mayor of Sheffield, Cllr Vicky Priestly. So I was invited too and drank tea in the Lord Mayor’s parlour and found out about the democratic arrangements in Hargeisa. It has a population of 1.5 million and what sounds like a “borough” structure similar to London.

Then I walked down to the bottom of the Moor to join a march protesting against the new immigration bill. There were about 80 of us, lots of banners and placards. There were good speeches outside the Town Hall. The organisers  got us facing outwards from the steps which worked well.  Passers-by could see our faces and banners and hear our chants, rather than just look at our backs. And we are not berating the City Council but national government (and possibly the national Labour party, which could only bring itself to abstain on the first reading of the bill). 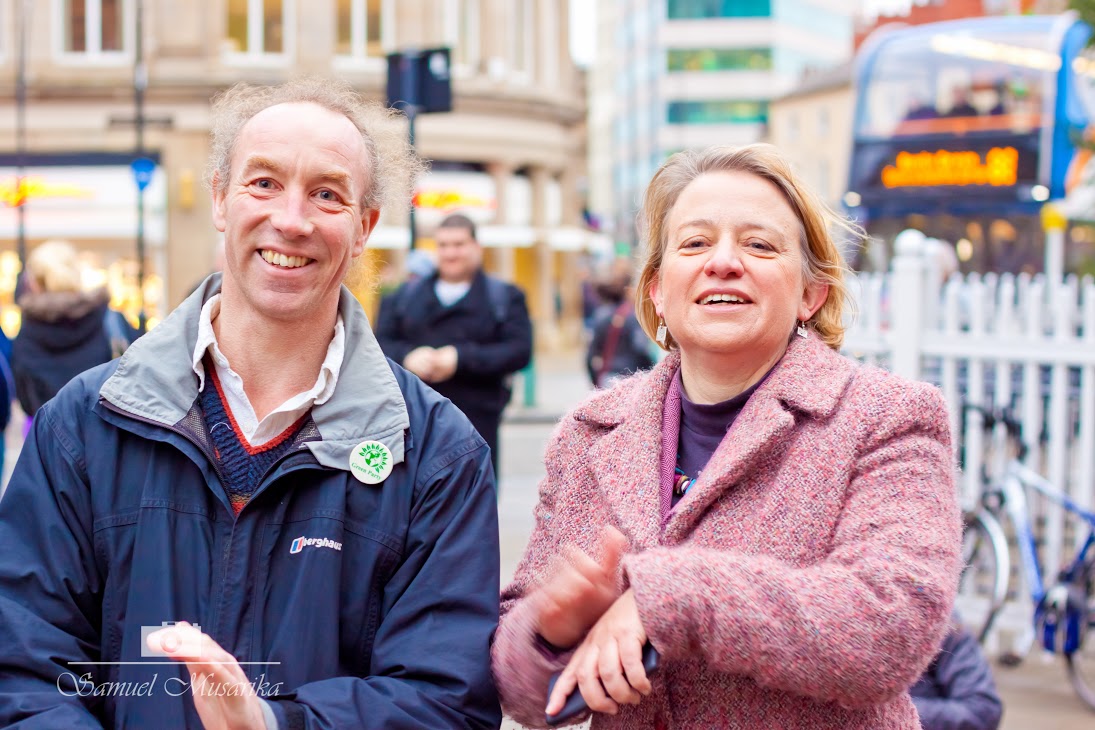 The Green Party leader, Natalie Bennett, came to Sheffield to speak, even though she had only been here the previous week for the Sheffield Green Party AGM. She picked Sheffield because it was the only city which was using National Migrant Day to demonstrate against the bill. See Natalie’s blog about the day here. 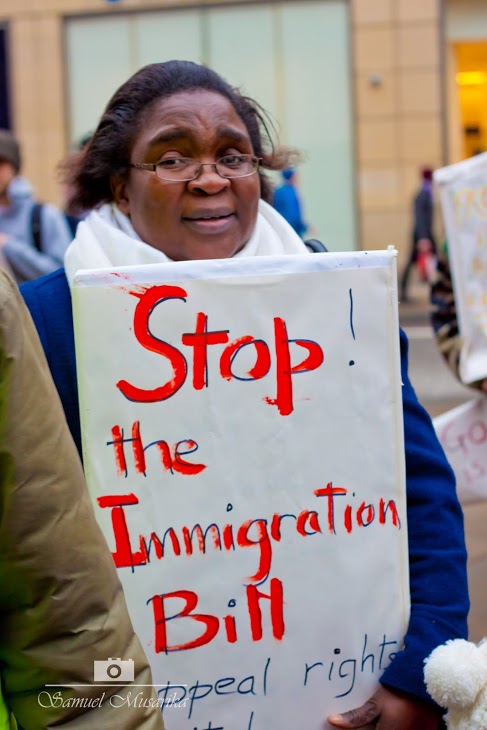 She and other speakers explained how the bill would require health workers and landlords to ask about people’s immigration status in order to deny certain groups access to health care and housing, and how this would foster an atmosphere of hostility to a much wider group of entirely innocent people. There are already plenty of measures to deter genuinely illegal immigrants.

An evening meeting was postponed at one day’s notice – the council leader’s invitation to the second “budget conversation” (which I had only received the week before). Officially this was due to lack of interest, but actually it was arranged at such short notice that officers were unavailable to front it up.  Makes me think the budget conversation is not an integral part of the administration’s decision-making process!

Thursday 19th – Christmas getting distinctly close. I – and presumably all councillors – had a card from the Lord Mayor and her consort, nice picture, nicely signed by hand; there was a joint e-card from the Council  Leader and Chief Executive, the main message being an appeal to donate to the women of steel memorial; and a large, personally signed card from Shaun Wright, the police and crime commissioner. Has he sent similar cards to all councillors in South Yorkshire? How much did that cost?

In the evening I went to a leaving drink for Jenny Patient, who has effectively been made  redundant from the South Yorkshire Energy Centre based at Heeley City Farm (a colleague of hers will carry on with a limited range of projects to encourage energy efficiency in the most needy communities). In 2008 we – the Green Group – were able to secure some council funding to keep it open as part of our budget amendment in that “balance of power” year. At least we extended the good work for a little time. And finally, I went to our annual Sheffield Green Party Christmas curry at Fagan’s on Broad Lane. Lots of people there – the local party is in good heart. 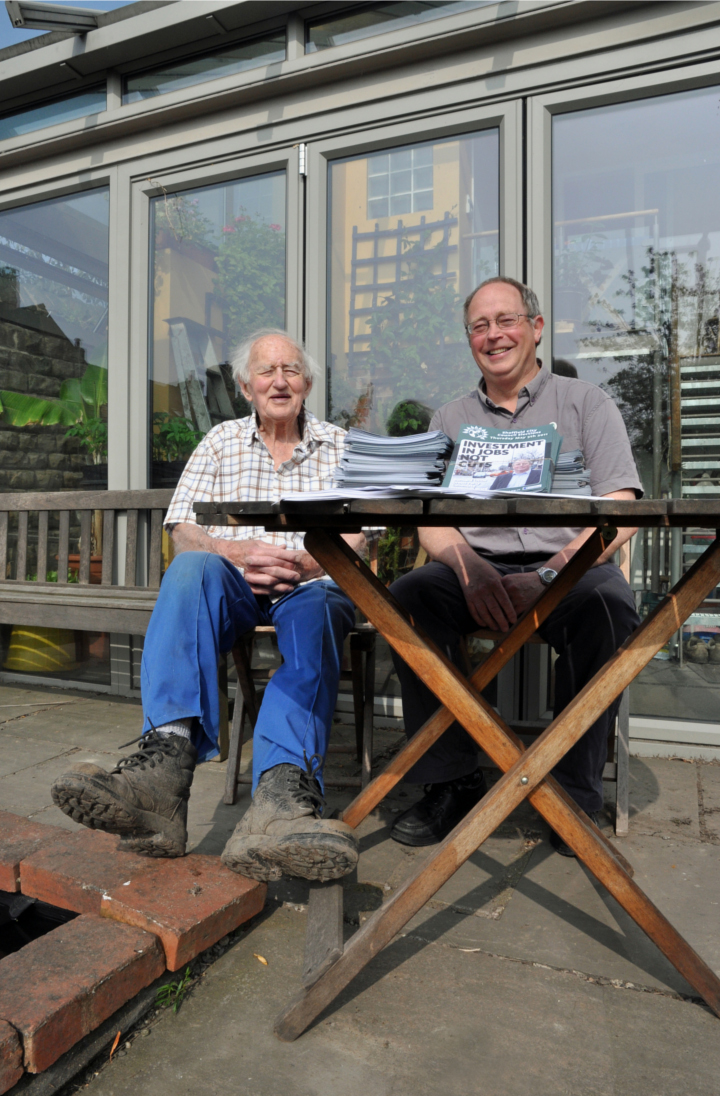 This was the day of my medical appraisal, thankfully straightforward as I had got the necessary patient and colleague feedback from before I was ill in the summer; and written up all the research I did around breast cancer – done to support my own decision-making about treatment options and efforts to avoid recurrence, of course, but acceptable evidence of my willingness to question, learn, encourage good practice. As soon as that was finished I went – armed with mince pies – to a gathering at Amyan MacFadyan’s house, the oldest member of the local party, still leafleting his street aged 93. There were four of us there and we had a good conversation about experiences of attending (and in his case teaching) in universities from the 1950s onwards. Some of us were lucky enough to have all, or at least part, of our studies paid for by grants rather than loans.

Saturday 21st – Councillor surgery at Highfield Library. I had asked two people to see me there and a new person turned up too, so quite a busy hour. All of them housing cases – seeking overcrowding or medical priority. There is simply not enough suitable housing in the city, especially for those who badly want to stay near the city centre so they can keep children at the same schools, get into work and support their extended families. The idea that people can just choose to move to more suitable properties (which is the theory behind the bedroom tax) is completely ludicrous.

There is One Response to Jillian Creasy – the week before Christmas

Nice to hear about all your doings. I miss so many good people from Sheffield. Christmas gatherings at Fagans and with Gillian/John were especially memorable. My life here is so very different as you can imagine but Green ideas are universal! We have Canadas first Green MP but also a Tory Govt which is making a name for itself but I won’t get into that here. Just want to send good wishes and am glad for all the work you do.