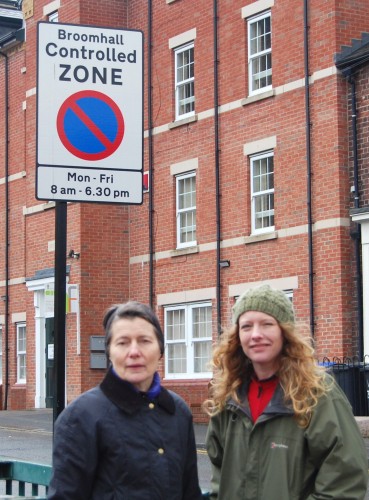 Sheffield Green Party are campaigning for a fair deal for inner city residents living in permit parking zones. They are petitioning the Labour Administration ahead of decisions on the Council budget for 2014/15. Greens say the price of permits is hitting vulnerable residents and businesses in parking scheme areas, who are now funding transport spending in wealthier parts of the city.

Central ward resident Sarah Jane Smalley said “It’s blatantly unfair that the people living closest to the city centre are being made to pay to deal with citywide problems. The Council was already making a surplus of over £500,000 on parking schemes before raising the prices. Even residents who don’t own a car are hit by the huge increase in the cost of visitors’ permits. Why should we be penalised by the Council because of where we live? We want a return to the lower prices when the money made and spent on the schemes was equal.”

Central ward Green Cllr Rob Murphy commented “The Council is short of money but times are hard for everybody. Local residents and businesses already suffer some of the worst congestion, air pollution and accident rates in the city. Permit holders shouldn’t have to subsidise the transport budget for the rest of the city on top.”

The Green Party online petition is at http://archive.sheffieldgreenparty.org.uk/parking/. Most signatures have been collected on paper.The petition wording is:

“We the undersigned believe the current prices for permits in Sheffield’s Parking Permit Zones are excessive and unfair. We also believe the increased surpluses from the parking zones should not be subsidising citywide transport schemes. We call on Sheffield City Council to lower Parking Permit prices to pre-2011 levels, ie £10 for the first car.”

There is One Response to Greens campaign against unfair parking charges