Unrealistic to expect volunteers to run the libraries on their own. 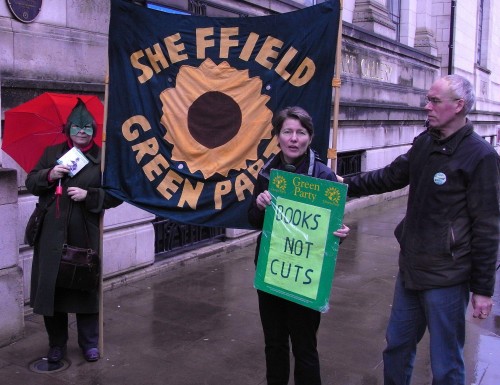 “This latest Sheffield Council announcement falls a long way short of the integrated, city-wide network of libraries we called for in our motion to the Council last week. Extra Council money to help with library heating, lighting, IT and volunteer training may be useful. But it doesn’t tackle the key issue that it seems unrealistic to expect volunteers to manage nearly a dozen independent libraries on their own, without any Council-funded professional staff to work alongside them. And the budget saving for 2014/15 is now down to just £640,000 but at the expense of the jobs of 75 experienced library staff.”

Notice of Motion Given by Councillor Jillian Creasy

a)    notes the unprecedented number of petitions and signatures in support of branch libraries, and the expressions of commitment, passion and willingness from the people of Sheffield;

b)    recognises the enormous value of the network of libraries in the community, especially on the educational attainment levels of children in less affluent areas;

c)     recognises the increasing need for free public internet access by people looking for work and claiming benefits, as well as the impact of libraries on nearby shops and business;

d)    notes the serious pressure on the Council from central Government cuts but also recognises the range of choices still available in Sheffield, at whatever level of financial commitment;

e)    believes the proposed model for community and independent libraries – which requires volunteers to both manage and finance a library service – is too rigid to be workable;

f)      believes a better approach would allow for volunteers to take part in an integrated, city-wide and established network of library services and in all libraries, not just a few; and

g)    therefore, urges the Cabinet Member for Communities and Inclusion to bring forward different proposals from those consulted on, that take account of Sheffield residents’ willingness to participate in a genuine community-based city-wide library service, and recognise the need for co-ordination and other input by librarians and other paid staff.

There are 2 Responses to Unrealistic to expect volunteers to run the libraries on their own.

Library staff could have funded through a freeze on recruiting non essential management posts and reducing spending on its never ending demolition of the city centre.