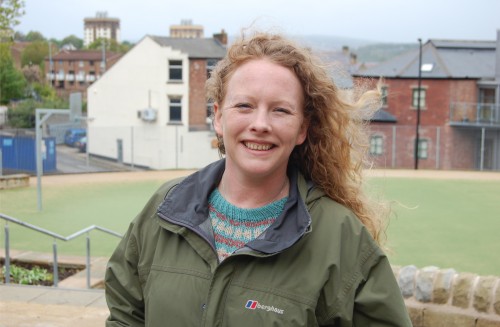 I wrote a blog on Tuesday about strong communities – and I said about how community means so much to me – that it’s about the place we live, our friends, our family, people with shared interests. I think we don’t talk much about simply caring or care when we talk about things like community (“care” seems to have become an institutionalised word) – we talk about respect, we talk about love, we talk about being turned off, we talk about ideas, but I think what really makes us work well together – as communities, as people, is caring – is care. That’s what we do (or don’t do).

This was my day yesterday– it made me think about how strong communities are built on people caring. 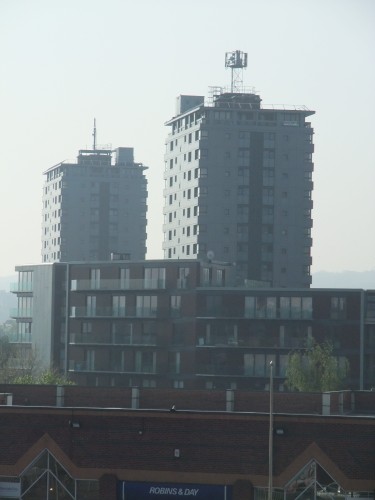 At 10.15am Rob Murphy turned up at my house to accompany me down to Leverton TARA. I suspect he in part came to get me as I’m not particularly known for being a morning person nor is punctuality my strong suit…but also because I haven’t been to Leverton TARA before and to catch up.

Leverton TARA was an absolute pleasure – it’s girl power old-school style and they run the TARA almost as an afterthought to the teas and coffees and catch-ups – amazing women, many of whom have lived in Leverton, or at least in the area , for longer than I’ve been alive – who care about it – I met Lily, Mary and Mary, Thelma, Margaret and Jean – there is so much to learn from our elders in the community.

Mary 1 told me that her brother died two weeks ago. He moved to Canada a long time ago and they haven’t been able to talk to each other for a while because he was too deaf to hear on the phone. I think we, people, get more accepting of death as we get older, and I am in awe of it. It was really lovely to hear her talk about him with such fond memories. I’m really glad that what I’m doing at the moment gives me the opportunity to talk to older people more. I think we benefit from multi-generational hanging out.

There was a guy called Gary who turned up to help out with the computers from Heeley Development Trust and we got to meet Kate and Eleanor from the Council who are working on green space projects across the area. Leverton TARA has merged with Thorpe and in the mix it was agreed, with Louise’s help (from the Council too) to do an open day at Randall Place, or Queenie’s , behind the Cremorne on July 31st at 2pm.

I learned there that the Police PCSOs are moving district, and so our local officers are going to change again. A PCSO called Holly is going to look after our area. I hope that she can be around for long enough to really get to know people. I know the police are suffering the same massive cuts as everyone else, and I think it’s so important for our community that the PCSOs (Police Community Support Officers) are given the right support in their turn to be able to do their jobs effectively. It makes it difficult when they are moved about so much. 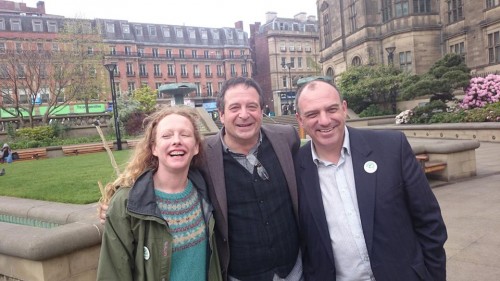 After the TARA I went into town to get involved with Mark Thomas’ 100 acts of minor dissent. I am absolutely supportive of people power and exercising our right to protest. It’s something so many people in so many places don’t have. Not surprisingly then, I have a lot of time for Mark Thomas. I think the first time I saw him was around the time of the protests against the Iraq war. We’d bought tickets to see him talk about a totally different subject, but then politics intervened and he was there encouraging us to put on our walking shoes and get down to London to be counted as being against an illegal war. I’m pretty certain I would’ve gone anyway, but seeing him that day definitely made it a certainty. If you don’t know anything about him, check him out. People talk about Tony Benn and Bob Crow and how we’ll never see the likes of them again, but it’s not true. Activists, protesters, supporters – that’s community too, and it was great to see so many Greens in the crowd. People get involved because they care – and have fun, and be silly…but the important point yesterday was about politicians’ broken promises. There’s always an important point. I try my very best to only make promises I can keep! The finale of the 100 days happens at the Leadmill on the 15th of this month.

Then I went home to meet one of my best friends Neil, who brought me a sandwich and cake from Bragazzi’s (thank you Neil!) as I was spending some time with him to help him with a presentation for an upcoming job interview. I was able to give him some pointers and he told me about some great ideas for involving people in new ideas. We had to break off though as I’d had a call to say my nannan hadn’t been feeling great and I like to go and see her on a Wednesday.

So then off I went to Halfway – where I grew up and where my nannan lives now (though she sometimes still thinks she lives in Darnall!). I bought into a car-share with some friends recently, which makes it loads easier for me to get out there and see her. On the way I popped in to see Maughan on Hobart Street. They’re packing up there to move house and though they’re looking forward to having a garden they’re sad to be leaving behind the friends they’ve made over so many years in the area. I know they’ll be really missed.

My nannan will be 98 this summer and though she isn’t the fire-cracker I remember growing up, she is still amazing. She seemed on pretty good form, if a bit confused, and felt and looked better once I’d got to work with the tweezers…hair will grow, our eyes will fail, I only hope that if I make it to that grand old age someone will be there to ease my vanity too. My dad was her only child, and I’m the eldest of us four ‘kids’- we’ve always been really close, she always makes me laugh. 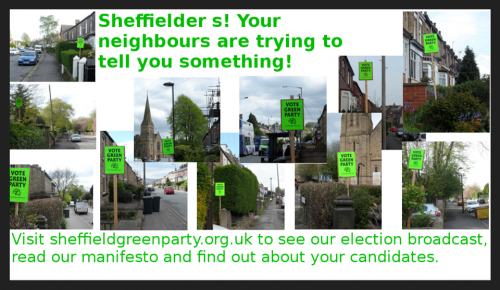 Back to Sharrow to meet Milton and Rob and then out canvassing in the evening. I was on Lancing Road which was great fun. Like so many streets in central, it’s such a mixture of people – old and young, long-serving members of the community and newcomers, different ethnic backgrounds, different interests and opinions…I really enjoy knocking on people’s doors and talking to them. (I also get some great ideas for my back-yard/garden!). There was hardly a person I spoke to who wasn’t absolutely going to vote green – often a testament to the hard work that Jillian and Rob have done locally. I only hope I get elected and can carry on in the same vein. There were a few issues that cropped up – the road resurfacing, parking, drugs…all things that we’re working to try and sort out.

So it was after nine when I got home and got on the computer. My house-mate Gus came home late as he’s working very hard to finish his PhD on heating systems (he’s headed into a fascinating sounding job to do with commercial restaurant heat reclamation – very green!) so we caught up on our respective days, and then Milton popped over to do some preparation for more door-knocking tomorrow. It took a while, but we enjoyed a tipple and some bluegrass music along the way, until it was finally past our bedtimes, the work was done and we parted company.

Which would be the end of a long and eventful day. But then I popped out to stick a permit on the car (as it’s shared I don’t have a resident’s permit for it – I should talk to my Councillors about that!) and I heard some shouting around the corner. I went to check it out and then found two young women in the street around the corner, one of whom seemed quite upset.

It turned out she had lost control of her evening, and in the process lost her keys, her purse and her phone. A neighbour of hers had found her in the street and had called the missing phone and the person who answered said they had her stuff. The problem was that the lost girl was really distressed and scared and didn’t want to go and meet him. So I brought them into mine and we calmed her down and tracked down her boyfriend. Then we all went to get her things back. I’m really not sure what had happened earlier, but the outcome was that it all got sorted out, that the lost girl had some good neighbours, a boyfriend whose friend came and brought him over, a man who gave her back her possessions. We did some good teamwork and, although I’m sure she didn’t feel great this morning, brought her home safely.

Community. I think it’s about caring for each other, and for fighting to make sure that the system cares about us too.

Find out about Sarah