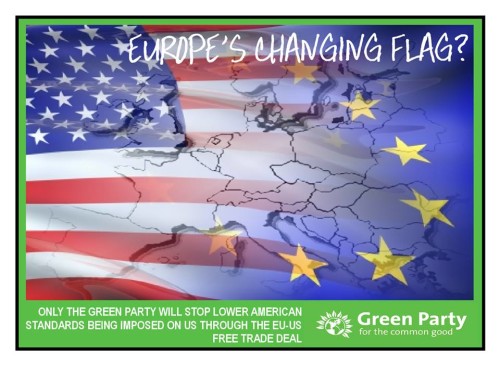 Peter Garbutt writes “There will be speeches from a few well-chosen organisations, and we’ll be handing out as much literature as possible. There may be dragons, too. It’s a case of bring your own placards, with simple messages about the TTIP. On board so far are the Green Party, Peoples Assembly, Trades Council, Sheffield Save our NHS, Frack Free South Yorkshire, WDM, and other organisations whose special interests will be destroyed by the agreement.
Please spread the word. I believe this is the most important battle we can fight at the moment.”
See the Facebook event here

To find out more about TTIP watch this video or keep reading.

THE Transatlantic Trade and Investment Partnership (TTIP), the proposed free trade deal (1) between the EU and US, is a corporate power grab that threatens our public services, environment and democracy, says the Green Party.

TTIP would grant corporations the power to sue governments (2), lock-in the privatisation of public services including the NHS, and undo regulations that protect workers, the environment and food safety and standards (3).

The secretive (4) deal must be stopped in its tracks argues the Green Party, the only party committed to people over profit policies. The TTIP deal is backed by the Tories, Labour, Lib Dems and Ukip (5).

In November 2013 Caroline Lucas, Green MP for Brighton Pavilion, tabled an Early Day Motion, raising concerns about TTIP and calling for negotiations to be frozen, and in February this year opposed TTIP when it was debated in Parliament. 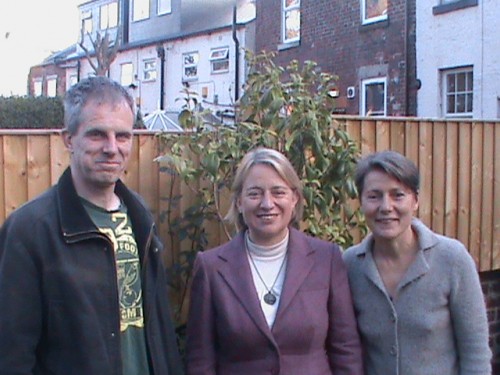 “The proposed deal threatens to blow apart the power of our democratic decision making. TTIP is a huge threat to hard-fought-for standards for the quality and safety of our food, the sources of our energy, workers’ rights and our privacy.

“The harmonization of food standards is particularly concerning. Under the deal food products include chemically washed poultry, livestock treated with growth hormones, and genetically modified crops – all allowed in the US – could be sold in the UK.”

“There is no guarantee that TTIP will be good for job creation – let alone decent jobs that pay enough to live on, respect labour rights and promote high health and safety standards. Why should we assume those standards will be upheld when other standards are likely to go down? These are the standards seen as barriers to business and TTIP is all about promoting business.”

“Though huge chunks of this trade deal are shrouded in secrecy what we do know is that TTIP poses a very real threat to the quality of life of people in the UK.

“This deal, favoured by multinationals, threatens to slash regulations that protect our environment and health. But, most worryingly, it represents a serious threat to democracy in our country.

“It’s astounding that the Lib Dems, a party with the word ‘democrat’ in their name, are  attacking those who want to protect Brits from a trade deal written by big business.”

“Greens are totally opposed to TTIP, which threatens to undermine our ability to protect the high standards of environmental protection, employment rights, and animal welfare that we take for granted.

“The proposals to protect corporate investors against the democratic interests of citizens must not be allowed to stand. As Greens in the European Parliament we pledge to do everything in our power to prevent TTIP from being agreed.”

On July 12, Green Party politicians and members will join people across the UK in taking action to say no to TTIP (6).

1. TTIP is a proposed ‘free trade’ agreement between the US and the EU. The negotiations around it are shrouded in secrecy, but the information that has been forced out shows that if successful, the agreement would lead to deregulation of what we eat, how we work, and increase the power that large corporations hold over national governments.

2. TTIP also proposes to include the ISDS (Investor-State Dispute Settlement) mechanism. Already in action in several countries under the existing NAFTA (North Atlantic Free Trade Agreement), this allows corporations to directly sue governments for introducing legislation that reduces their profits.

3. The Center for Food Safety has already raised concerns about the potential for TTIP to establish a Regulatory Cooperation Council, which could result in ‘harmonisation’ of safety standards, meaning that food not meeting EU standards could be sold here anyway. Such products include chemically washed poultry, livestock treated with growth hormones, and genetically modified crops.

4. On both sides of the Atlantic, elected parliamentarians are only allowed limited access to information about the negotiations, while around 600 ‘corporate advisors’ have full access to this information.