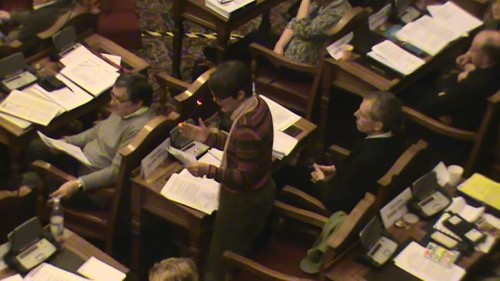 Emergency Motion calling for resignation of Shaun Wright, the Rotherham Police and Crime Commissioner. National news cameras were there. Proposed by Labour, seconded by LDs. Very ‘statespersonally’ session with only three party political murmurs – Roger Davison (LD) pointing out that single-party domination including on Scrutiny Boards is unhealthy (he is only opposition member on Police and Crime Panel, chaired by Harry Harpham, who until a week ago was totally supportive of “Shaun”) and Joe Otten (LD) wondering why Shaun Wright was chosen in the first place (he was selected as Labour candidate by the Regional Labour Party in 2011, by which time he had already long since resigned as Cabinet Member for Children’s Services precisely because of the uncontained Child Sexual Exploitation). The third was someone dropping an anti-UK leaflet on Jack Clarkson’s head, who promptly ran up to the public gallery to “have it out with him” and had to be called down by the Lord Mayor.

Rob Murphy made good simple speech – sympathy to victims, why Shaun Wright’s position is untenable and the most important thing is to review Sheffield to make sure we are preventing similar tragedy, breaking only to say he found the commotion caused by UKIP “disappointing, especially during a debate on this subject” (applause, spot on, they will hang themselves in due course).

Public questions – quite a few (but none from the Freedom Riders who had been rallying outside – I had made a quick speech on Town Hall steps before going into Full Council). Nigel Slack asked Cllr Mary Lea if Labour supported TTIP in light of new confirmation that it WILL include the NHS. She gave a long reply saying how Labour would reverse privatisation bla bla bla and would protect it from TTIP, – i.e. she didn’t get the point or chose to ignore it.

Cllr’s questions – I had asked why SCC has highest rate of evictions, not answered in the written response (which was just a list of how SCC supports tenants in financial difficulties, which we knew) but when I asked it again as a supplementary Cllr Harpham actually tried to answer the question, which is very rare (a. have to be fair on all rate payers, must enforce those who don’t; b. proud not to have evicted solely for Bedroom Tax; c. SCC also collects water rates, not all councils do that; d. some council don’t count evictions during introductory tenancies, whereas SCC does).

Order of motions – item confirming Greens will have lead motion in October, i.e. next Full Council

After the guillotine, I won’t go through everything, but the motions we had input into were as follows:

Libraries – Brian’s amendment pointing out that each library and community group is different and council should adopt a flexible not “one size fits all” approach was unanimously accepted – Hooray! will be useful lever for community groups in future discussions.

Penistone Rd/”Labour are anti-car” motion – only we (and possibly UKIP – they seem a bit wavery in their voting, not sure if their hands were going up or not) voted for our sustainable transport amendment – Labour’s “we would have done it, but it was too costly to raise speed limit” amendment got through

NHS/TTIP – we voted for Labour’s motion recognising that Health and Social Care bill and TTIP are threats to NHS (I should have put our stronger motion as an amendment to it and forced a vote); when it came to our stronger motion, Labour put their weak motion as an amendment and it got through. So they do not agree that TTIP as a whole is wrong and would damage other things – food, farming, environment – which affect our health as well as the NHS itself

UKIP’s motion on tax avoidance supported by all, plus Labour pushed through an amendment supporting Labour policy on tax