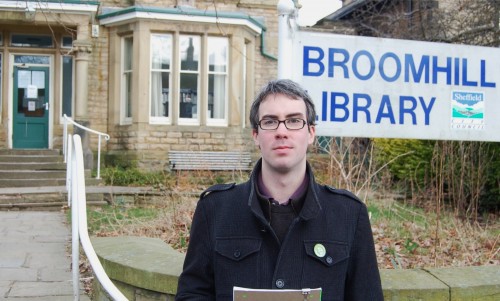 At a meeting today, Sheffield councillors unanimously approved a Green proposal which urged the Council to take a flexible approach to working with community groups that have come forward to support 15 library branches across the city.

The Greens’ amendment to the libraries proposal recognised that each library branch and community group is different and the Council’s approach needs to be tailored to each one.

“I was pleased that councillors agreed with the principles put forward in our amendment, namely flexibility and openness to fresh ideas”

“If community-run libraries are to succeed, the Council needs to take account of the very different challenges that each branch faces, rather than adopting a ‘one-size-fits-all’ approach.  It is essential that the Council now puts these principles into practice.”

The original motion and the Green Party amendment are below:

10. NOTICE OF MOTION GIVEN BY COUNCILLOR MAZHER IQBAL
That this Council:
(a) welcomes the news that all Sheffield libraries are now on track to
remain open;
(b) notes that libraries in other towns and cities across the country have
closed due to government cuts and commends the fantastic efforts
of community groups across the city who have come together to put
forward business plans to run the associate libraries to keep
libraries open in Sheffield;
(c) welcomes that the Council will support associate libraries by
funding building running costs, providing access to the Council’s
library catalogue and computer service, helping train volunteers and
providing ongoing advice and support;
(d) continues to oppose the unprecedented level of cuts imposed on
the Council by central government that have led to cuts in the
funding of the library service, noting that by next year the Council
will have lost 50% of its core government funding which is impacting
on services across the Council;
(e) resolves to continue to work with all hub, co-delivered and
associate libraries and to write to all community organisations who
submitted business plans, and external partners who supported the
groups, thanking them for their efforts in keeping open all libraries in
the city, and to all staff for their continued dedication and
commitment to the service in extremely difficult times.

(f) recognises that each library branch and community group is different, and that a ‘one-size-fits-all’ approach to working with co-delivered and associate libraries will be less effective than an approach that is tailored to each individual context; and

(g) therefore calls upon the Administration to give full consideration to alternative ideas put forward by community groups for the running, financing and future development of co-delivered and associate library branches in the city.

I completely agree with your assessment of the running of the Library service. Could I ask that the green party ask the council to ensure that at least one member of library staff is present in each library to provide proper oversight, that volunteers are either subject to DBS checks due to having access to a computer system containing contact details of children (or at the very least that access to this database is restricted to those who do hold a DBS check), and that visitor numbers are recorded for the volunteer libraries (they are not at present) in order to assess what impact the withdrawal of staff has had on the number of visits.