Celebrating Modern Feminism at the Off the Shelf festival

Laura Bates is back on November 22nd to curate a day of events “Celebrating Modern Feminism” at Sheff University Students Union . Following her sell-out festival special appearance in May we are delighted that journalist Laura Bates is our guest curator this year with her theme ‘celebrating modern feminism’. Laura’s guests explore some of the key issues and we hope you will join them and the discussion. 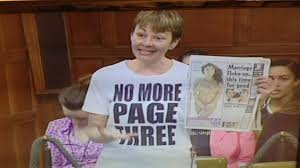 Lucy-Anne Holmes – No More Page 3 2pm-3pm Lucy-Anne Holmes is the founder of the No More Page 3 campaign which she started in 2012. The campaign now has over 170,000 signatures on an online petition and public support from a host of organisations and charities including Mumsnet, UK Girlguiding and Rape Crisis. She talks about the depiction of women in the media, building a campaign from the ground up, how the campaign has grown and changed, dealing with backlash and why she’ll be continuing her work

Nick Batley Feminism and Men 3.30pm -4.30pmNick Batley is a sex and relationships educator and a volunteer for several sexual health charities. He was shortlisted for the Young Person of the Year at the 2014 UK Sexual Health Awards. He is also a film and media student at Birkbeck, University of London and has a strong interest in the depictions of gender and sexuality in popular culture. Nick will be talking about the role men can play in the modern feminist movement.

Nimco Ali – The fight to stop FGM 3.30pm – 4.30pmFemale Genital Mutilation (FGM) describes any deliberate, non-medical removal or cutting of female genitalia and is recognized internationally as a violation of the human rights of girls and women. Recently FGM has become the subject of a global media campaign due to the successful campaigns started by young women on-line but there is much still to be done.Nimko Ali from the group Daughters of Eve talks about this important subject.

Laura Bates – Everyday Sexism 7.30pmEveryday Sexism is the project that has inspired a worldwide movement, a manifesto for change and a ground breaking anecdotal examination of sexism in modern day society.In 2012 after being sexually harassed on public transport, journalist Laura Bates started a project called Everyday Sexism to collect stories for a piece she was writing on the issue. Astounded by the response she received she realised that the situation was far worse than she’d thought. It was clear that sexism had been normalised. Bates decided it was time for change. Laura talks about her project and book -the first to give a collective online voice to the protest against sexism and will inspire you with her intelligence, lucidity and passion for the subject. In collaboration with University of Sheffield Students’ Union.