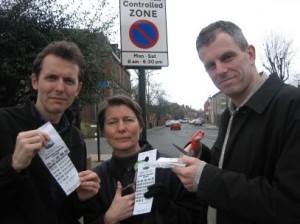 A group of residents who began to get organised after a public meeting organised by the Central Ward councillors have set up a new campaign group.

Sheffield residents are continuing the campaign against unfair parking charges outside homes and businesses in parking permit zones and have formed a new group: Sheffielders for Parking Fairness (SfPF). The cost of resident’s permits has risen by 260%, from £10 to £36 for the first car and visitors permits have increased by 400%, over the same period. Currently, Sheffield Council generates a surplus of £1.1million a year from parking zones across the city.

SfPF is collecting funds to take this campaign to the courts. This follows a similar campaign by residents in the North London Borough of Barnet where the local council lost and residents were able to claim back permit fees.

Michael Marsh, the Chair of the new group says

“SfPF needs to raise £1500 for the next stage in the process, instructing solicitors to act in initiating a Judicial Review. We are asking local residents and businesses to donate to the fighting fund. Bank transfer is the easiest and cheapest option for us:

We need to raise this money AS SOON AS POSSIBLE, so PLEASE donate today!”