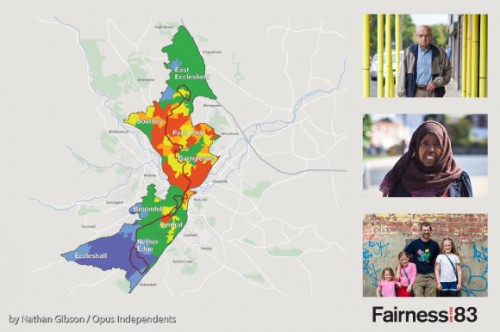 The 83 bus route, as illustrated in the films ‘Fairness on the 83’ by Opus Independents is a tangible connection to inequality in the city.

Inequality is widespread. But is this unsustainable? Come to hear Richard Wilkinson, one of The Spirit Level’s co-authors, at our public meeting on Wednesday 10th December – see Save the Date section below.

The widely-acclaimed book The Spirit Level demonstrated that nations that are unequal in terms of their inhabitants’ incomes score relatively poorly on other indicators such as health and education. See  The Spirit Level.

Which party will tackle inequality and poverty?

Real wages are falling, jobs are less secure and housing costs are rising. We might not expect equality to improve under a Tory government in the UK. But is Labour’s stance much better?

The national Social Mobility and Child Poverty Commission predicts this country faces a future divided by rich and poor, with the number of households in absolute poverty rising significantly in the next decade. See http://www.theguardian.com/society/2014/oct/20/britain-future-divided-rich-poor-poverty-commission-report

The Commission’s chair said that each of the three main political parties were committed to eye-wateringly tight spending cuts. He also asked whether Labour’s promise of a rise in the minimum wage to £8 an hour by 2020 was sufficient.

Compare that to the national Green Party’s pledges for a £10 minimum wage, closing of tax loopholes and taxing wealthy people more. 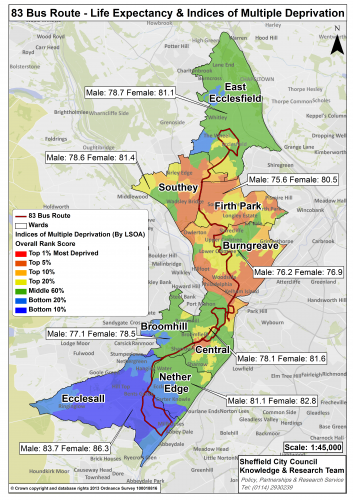 The number 83 bus route, illustrating life expectancy and indices of multiple deprivation through the city.

It’s well known that Sheffield is split in terms of health and wellbeing, with the people in the south west of the city faring much better than those in the north east areas, in terms of income levels, health and educational achievement.

This is illustrated by the 83 bus route, which joins Ecclesall and Ecclesfield, travelling through both well-off and more deprived areas on its journey.

Sheffield’s Fairness Commission was set up a few years ago to consider how fairness could be improved in the city. And the Sheffield Equality group has focused on the local implications of the findings in The Spirit Level work.

The People’s Assembly, Church Action on Poverty and Sheffield Equality have got together to organise a meeting on Saturday 29th November about poverty in Sheffield.  http://archive.sheffieldgreenparty.org.uk/2014/10/19/poverty-in-sheffield-today-saturday-29th-november/

It’s clear that inequality and living standards will be key issues in the May 2015 general and council elections. We’ll be arguing that Green policies are the best way to tackle inequality and unfairness. As illustrated in SRGP’s slogan  Working together for a fairer, greener future.

There is One Response to Is Inequality Unsustainable?

It was a great meeting – glad I went.