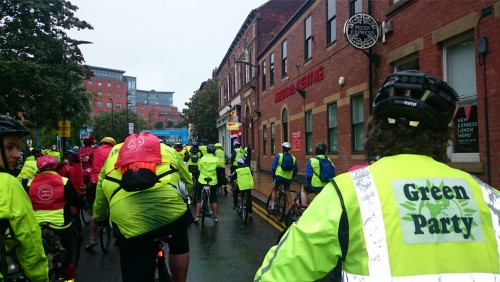 Sheffield Green Party Councillors are calling for actions, not words, on cycling at next week’s Full Council Meeting.

The call comes after a recent list of eight major cities ranked by councillors supporting the national cycling charity CTC’s Space for Cycling campaign placed Sheffield BOTTOM. This is all despite the huge success of Le Tour in Yorkshire, and the council’s stated commitment to changing the culture of road use to ensure sure people aren’t scared to cycle or scared to allow their children to do so.

Cllr Jillian Creasy, who is standing for Parliament at next year’s General Election, said, “The Cycling Enquiry came out with some great recommendations, it’s a shame that work is not progressing. Cycling should be safe, enjoyable and convenient for people of all ages and proficiency”.

The Motion which the Green Group will be submitting highlights that Sheffield City Council only spends £1.89 per person on capital spending to support cycling, while many other cities, including Leeds, Manchester, Birmingham and Bristol, spend in excess of £10 per person.

Councillor Sarah-Jane Smalley, Green spokesperson on Cycling, said “You really have to question whether there’s a genuine commitment to change when the people designing our roads aren’t properly trained, and the Council isn’t bidding for grants to create a surge in cycling”.

No 10 Press Release on Cycle Funding

a) affirms its commitment to Sheffield City Council’s Vision for Excellent Transport in Sheffield: We need to change the culture of how we use our roads, so that people are no longer afraid to cycle or allow their children to do so.  Our streets, roads and local communities need to become places for people, where cycling and walking are safe and normal.

b) regrets that only 11% of Sheffield City Councillors have signed up to support the Space for Cycling campaign making Sheffield the lowest ranked of eight major English cities committing to space for cycling, as per the recent report from the national cycling charity CTC.

c) notes that other core cities including Birmingham, Bristol, Leeds, Manchester and Newcastle spend in excess of £10.00 per head on capital funding for cycling including Highways, as they were successful in winning Cycle City Ambition Grants, which Sheffield City Council decided not to bid for.

d) regrets that Sheffield City Council spends only £1.89 per head on capital funding for cycling, including Highways.  This is significantly lower than the £10.00 per head recommended by the All Party Parliamentary Cycling Group’s report.

e) commits to responding positively to the government’s Cycling Delivery Plan (expected early December) which invites local authorities to submit expressions of interest in partnering with the Government to deliver ambitious growth in cycle use.

g) is concerned that policy agreement is not turning into action as demonstrated by slippage against the recommendations and delivery milestones agreed by the Cabinet in July 2014 relating to the Cycling Inquiry Report as follows:

i) The Sheffield Cycle Group with Cycle Sheffield and in consultation with partners and the public, and/or a cross-departmental Council working group chaired by Transport Planning consulting with partners has not  been established.

ii) the drawing up of the revised Sheffield Cycle Action Plan, plan of the strategic cycling network and delivery plan by the group/s in (g i) was timetabled to take place Sept-Nov 2014 but haven’t been carried out, making

h) is further concerned that some recommendations from the report have not been carried out in earnest, or in full consultation with partners, organisations and others as per the report’s commitment indicated by the following:

i) the Cycling Champions have not regularly attended Cycle Forum meetings or established regular diarised meetings with partners such as Cycle Sheffield or CTC to ensure that the recommendations from the report are being progressed.

ii) the Council did not seek input to any response to the DfT consultation on Traffic Signs Regulations and General Directions 2015 (TSGRD) despite commitment to helping to encourage and enable cycling through DfT regulation on allowing separate traffic lights for cycling.

iii) whilst a Cycle Audit process has been developed and is being applied to all new highway schemes, it includes no scale or metrics and therefore carries negligible weight.  This is despite recommendations at Cycle Forum for a more stringent procedure and existing good practice which has been developed and could be easily replicated, for example from the London Cycle Design Standards and/or Welsh Active Travel Bill Guidance.

iv) Highways Engineers have not received any Continuous Professional Development/Workplace Development to ensure that they can bring the new Transport Vision into reality in relation to Cycle Design.

j) further urges the responsible Cabinet Member to ensure that progress against the Cycling Inquiry recommendations and Delivery Milestones is made publicly available on at least a bi-monthly basis.  This will include the communication of recommended actions and actions taken to remedy slippages.

i) calls for Highways guidance to be amended to ensure that the Transport Vision in a/ above is considered and relevant action taken from a pre-planning stage.

ii) requests that all Highways Engineers receive Cycle Design Training, so that this is properly considered from a pre-planning stage.  As an example Sustrans offers such training, endorsed and certified by the Chartered Institution of Highways and Transportation.

k) notes the publication of the document “Making Space for Cycling; A guide for new developments and street renewals”, published by Cyclenation and supported by Bike Hub, CTC, British Cycling, Cycling Embassy of Great Britain, London Cycling Campaign, CPRE and Cambridge Cycling Campaign and commits to promoting its active use in Highways planning.