“Money alone can not solve the health crisis”. Jillian Creasy 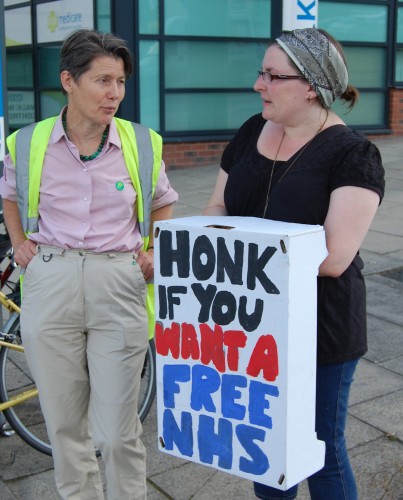 Society needs to change as well as the NHS for our health to improve, according to a local Green Party candidate who will lead the Festival of Debate health event next week.

Dr Jillian Creasy, a GP for over 25 years and a city councillor for 11 years, will lead the discussion “Saving the NHS: Why money isn’t enough” at 7pm, Wednesday April 1 at the Central United Reformed Church.

She will focus her speech on how proactive healthcare can improve the general health of the population.

The health and social care spokesperson for the Green Party as well as their candidate for Sheffield Central, Dr Creasy said: “The NHS is in crisis, but the problem isn’t only due to lack of funding. We need to put in place lots of other measures too.

“If we had a fairer society and a healthier environment, people wouldn’t be so poor or ill, which would reduce demands on health and other services. We also want our society to help people to do more to look after their own health and well-being, supported by better decision-making and services.”

Jillian Creasy can be contacted via 07939 182362 or via press@sheffieldgreenparty.org.uk.