How long have you lived in Sheffield? 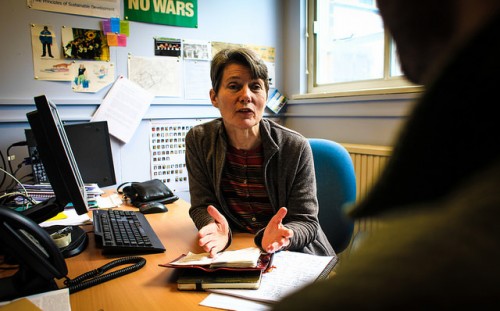 Jillian talking to a local constituent.

I came in the 1980s to train as a General Practitioner and ended up staying. I love the friendliness and city life, but also the easy access to the Peak District.

Why the Green Party?

I became active in the Green Party following the 9/11 atrocities and found they had more to say than just “no war”. The Green Party members I met were talking about how to create a more sustainable world in which we would not be fighting wars to control oil supplies. Later, I got involved in the campaign against the giant new incinerator and was impressed by the careful research, community involvement and positive alternatives put forward by the Green Party.

What did it feel like when you were elected as the first Green Councillor on Sheffield City Council?

It was exciting and daunting, being the only Green amongst 84 councillors, but I was ready to learn and make the most of every opportunity. In those days I did more work on national and international campaigns – human rights, nuclear power and climate change. As the Green Party Group on Sheffield City Council has grown we are much more involved in community and city-wide issues. This General Election campaign has plunged me back into speaking and writing about the big political issues (austerity, the NHS) and reminds me of those early years.

What is your proudest achievement in your time as a Sheffield Councillor? 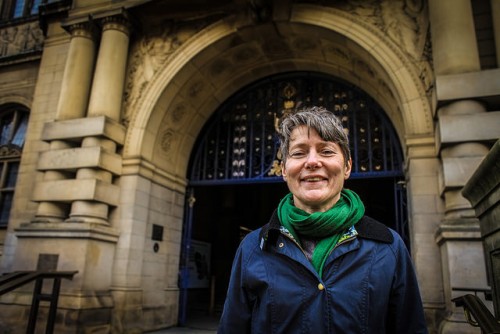 It has to be working with local people on campaigns to improve their lives and neighbourhoods. This has included fighting to save a Surestart Centre and local schools, to get people the housing they need, parks improved and setting up a new community groups. The best thing is seeing people come together and find their voice. Whatever the outcome of the campaign, people are more empowered and better connected.

Are there skills that you have as a Doctor that would help you as a local MP? 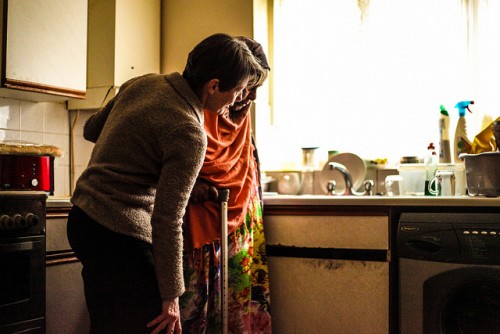 The single most important thing in both roles is listening to what patients (or constituents) are telling you. And then, while helping individuals, you learn how the system works (or fails) and build up a fund of knowledge and connections. It is important to be able to multitask and to deal carefully with mundane alongside urgent and high profile issues.

What changes have you seen in Sheffield over the last 30 years?

Changes in employment patterns: heavy industry has declined and research, digital and creative industries are more important. But in the last five years, the city has been blighted by unemployment, low wages and cuts to public services. I would fight for a fairer economy and more equal city. The City Centre has changed massively, with lots more residential blocks and restaurants and bars taking over from small shops. The New Retail Quarter was always about to happen, casting a planning blight on the heart of the city. Hopefully we will now see a project with more independent shops and entertainment rather than chain stores and yet more car parks.

Repeal the Bedroom Tax, make the living wage compulsory, stop tax dodging, reverse the privatisation of the NHS and other public services, and bring the railways back into public ownership. I would also like to see proportional representation at all levels of government, including an elected second chamber (House of Lords) so that parliament represents a range of views, not just two very similar big parties.

What do you think Sheffield people want from a local MP?

Hard working, making the effort to find out their views and represent them, having a vision for a sustainable and vibrant city; standing up against the system when it needs to change. People want their MP to be visible and not to duck out of votes. If you don’t stand up for what you believe in what was the point of all those people voting for you?

What difference would a Green MP make? 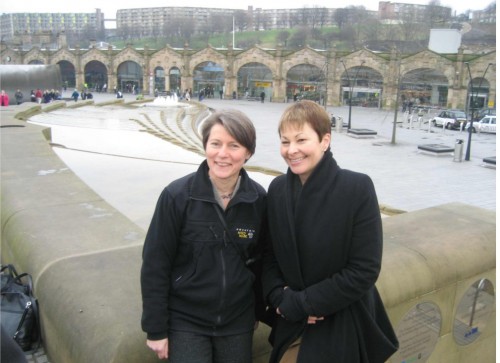 Caroline Lucas was elected as the first Green MP in Brighton at the last General Election and has stood out from the 650 or so others because she does stand up for what she believes in and gives a voice to people who are often ignored by other politicians. It is not just the people on the South Coast who want principled politicians who stick by their values. That’s what I can offer the people of Sheffield Central. The North deserves a ‘Caroline Lucas’ just as much as the South does.

When you aren’t being a politician or a GP how do you relax? 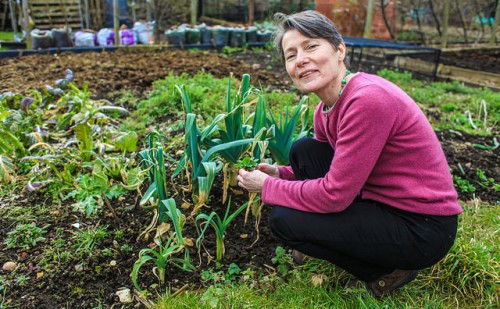 Jillian on her allotment.

I was lucky enough to get an allotment when I first moved to Broomhall. It gives me huge pleasure to grow fruit and vegetables and then to harvest and cook treats for my family and friends. I also belong to a book group and sing in a choir. My favourite holidays are walking in the mountains – in the UK or Europe.