Green policies in action – how the parties compare 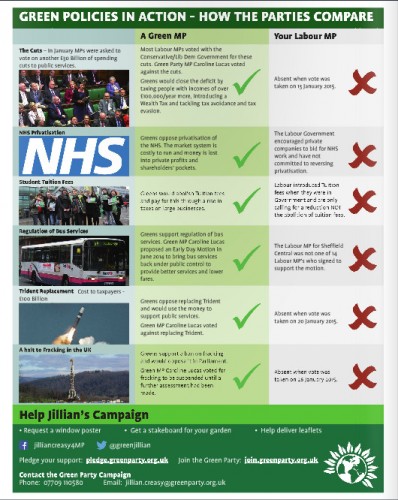 I agree with Mr Donnison, who says that political campaigns should focus on policies (Sheffield Telegraph Letters, 16th April). In fact the leaflet he refers to does exactly that. It sets out six key differences between Green and Labour party policy and compares the voting record of Green MP Caroline Lucas and the sitting Labour MP for Sheffield Central, Paul Blomfield. The article is reproduced here.

The Greens offer an alternative to austerity, whereas on 13th January this year, all but five Labour MPs voted with the Coalition Government for £30 billion of public service spending cuts. We oppose the privatisation of health care whereas Labour first opened the NHS to private providers and would allow them to continue profiting from it. We would abolish tuition fees entirely, whereas Labour introduced them and only proposes a reduction to £6000 a year. We would bring bus services back into public control but only 14 Labour MPs – not including Paul Blomfield – signed Caroline Lucas’ Early Day Motion on re-regulation. We oppose nuclear weapons and fracking, whereas only 19 Labour MPs supported a recent motion against replacing Trident (20th January) and only 21 voted for a moratorium on fracking (26th January).

The House of Commons voting system does not record abstentions, so we used the term “absent when the vote was taken” to indicate that Paul Blomfield did not vote against austerity, Trident or fracking. We did not say he was invisible or comment on why he chose not to vote. It is for him to explain these facts and to tell voters how he would vote on similar motions in the future.

If elected as an MP, I will stand up and be counted on the difficult issues, including opposing Tory and Labour spending cuts, and stopping Trident and fracking completely. We will not solve austerity, militarisation and climate change unless we are bold enough to break out of the status quo.

Here is the letter from Mr Donnison, published last week in the Sheffield Telegraph.
“The Green Party leaflet in support of Jillian Creasy is ridiculous in seeking to claim that that Paul Blomfield is invisible and ducks out of votes in Parliament. This is a man voted Parliamentarian of the year 2014 by Citizens Advice and the Most Inspiring Leader in Higher Education in the Guardian’s 2015 University awards. This kind of smear is usually assign that a political party is losing the arguments, and, as the old footballing metaphor has it, resorts to playing the man and not the ball. Ms Creasy should withdraw her claims and apologise for making them.”