Public Meeting:Greens Against Austerity – Taking action in Parliament, in the Council and on the Streets 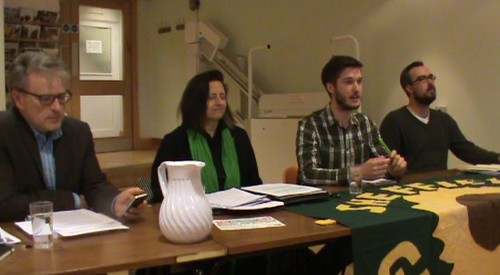 Adrian Cruden (Campaign Officer for Yorkshire and Humber Green Party) opened the meeting with an informative speech on the history of the economics of Government debt, showing clearly why the need for austerity is a myth.

Romayne Phoenix – (Co-Chair of the national People’s Assembly Against Austerity and Trade Union Liasion Officer on the Green Party Executive) then showed how austerity is an idological attack on the poor and vulnerable.

Councillor Brian Webster then spoke about austerity from the perspective of a Sheffield City Councillor.

The meeting concluded with a wide ranging discussion, covering developments in Greece, how to get young people involved in politics, economics education, transparency of political parties, strikes, trees, Positive Money and much more!

Many Sheffield Greens will be traveling to London on Saturday for what we expect to be the biggest demonstration since the Iraq war, calling for an end to austerity. Please join us. Find out more here.