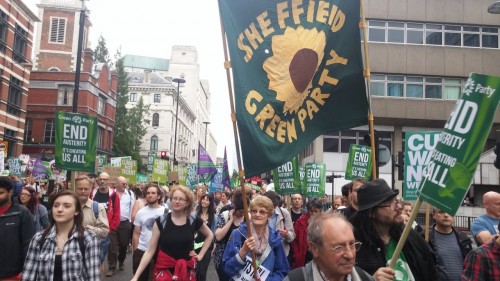 * Natalie Bennett: Demonstration will show our “determination to get real change in Britain.”

* Sheffield Green Party’s Declan Walsh: “Austerity is a failed political experiment that punishes ordinary people for the mistakes of the super rich.”

* Caroline Lucas MP: “Voting for what you believe in isn’t always enough – sometimes you have to take to the streets too.”

Sheffield Green Party members and activists will be joined by leading Green Party politicians in the Green Bloc at the People’s Assembly Against Austerity’s national #EndAusterityNow march and demonstration (1) in London on 20thJune 2015.

Over 50,000 are set to join the People’s Assembly Against Austerity march through London.

The Green Party is fighting for a fair economy that works for all. We can transform our economy if we have the courage to challenge vested interests and close the gap between the rich and the poor. The Green Party is committed to ending austerity and restoring the public sector, creating over one million good jobs that pay at least the Living Wage. 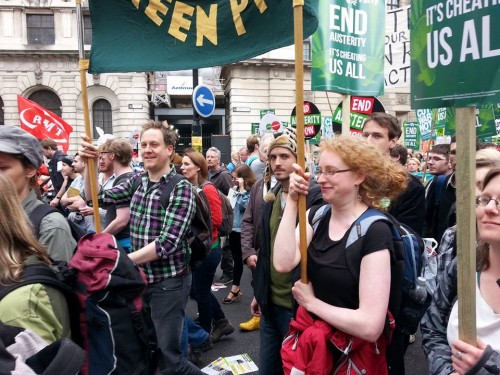 “When the queues at the food bank grow longer and bankers bonuses grow larger; it’s time to take to the streets and march. We’ll be marching as part of the People’s Assembly saying clearly that austerity is a failed political experiment that punishes ordinary people for the mistakes of the super rich.”

“Sheffield has seen disproportionate and devastating cuts from this government. Sheffield people are suffering from the cuts to frontline services with the poorest and most vulnerable most affected.

“When Tories, Labour and the Lib Dems are all advocating the same poisonous austerity policies it’s time for us as Greens and members of the communities affected to stand together and show that we will not accept it.

“We’ve seen a huge upsurge in activism since the General Election on May 7th 2015. June 20th is the chance to bring that all together, to demonstrate on the streets the determination to get real change in Britain.”

“Voting for what you believe in isn’t always enough – sometimes you have to take to the streets too.”

The Green Bloc will assemble at 11:30am at Cornhill (Royal Exchange). Find out more here: http://greenpartybloc.weebly.com

1) A message from the People’s Assembly Against Austerity –

“June 20th will be an almighty show of strength. Everyone is welcome, and as always, it will be a family friendly event. The People’s Assembly have secured an accessible route for the march, with both first aiders and trained stewards supervising and spread throughout the entire demonstration. Last year we saw 50,000 people from every section of society, young and old, march from the BBC to Parliament Square. This year, we aim to double those numbers, and with all our voices, send a clear and simple message to the new government: End Austerity Now!”