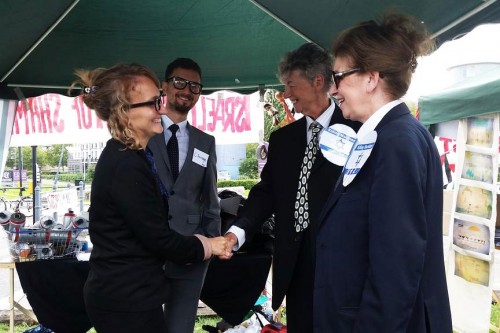 Heather Hunt , Sheffield and Rotherham Green Party member, donned a corporate suit and posed as an Israeli arms dealer on the first day of action to stop the London based arms fair on Monday September 7th.  This day was to highlight and protest about the Israel and UK two way arms trade .

Heather, 2nd from right,  is part of Sheffield Creative Action for Peace  (SCRAP) and talks about her motivation and the day of  action.

Israeli-UK two way arms trade. BDS campaign
“I was shocked that the UK government had invited Israel arms dealers to have a pavilion inside the DSEI arms fair to be held at the Excel centre East London. I am proud that the Green Party has supported the Boycott, Disinvestment and Sanctions campaign to put pressure on Israel to comply with International Law. A cutting edge is to stop UK arms sales to Israel. However, I hadn’t realised how complicit the UK and Israeli governments are in this mutual support of arms dealing as good business.

So I was delighted to be part of Sheffield Creative Action for Peace (SCRAP) and its contribution to the protest to highlight and oppose this two way arms trade. Two of us posed as Israeli arms dealers with our badges, “killing machines are us” with client support sheets detailing how you can get more for your bucks with our combat tested weapons.   (eg Friendly and uncritical allies like the UK and US.) We displayed our products to interested independent media from our portfolio of 2D replicas which included our biggest sellers:
Elbit Hermes 450 drones, made in the Israeli owned Elbit factories in the UK  and used extensively on the Gaza strip.  Our sales pitch, backed by research, included “Can be fitted with two hellfire missiles. Recent sales include Columbia, Indonesia and Sri Lanka.”
And
Merkava tanks
Manufactured by Israeli military Industries and assembled by Israeli Ordnance corps. Fitted with 2 machine guns which can shoot down helicopters. Field tested on Gaza.  One tank killed 120 Hammas militants in Protective Edge. Sales increased after assault on Gaza.  “Very serviceable. Main battle tank for many countries. Selling well. Now upgraded to include night sensors and target trackers and adapted for guerrilla warfare.” 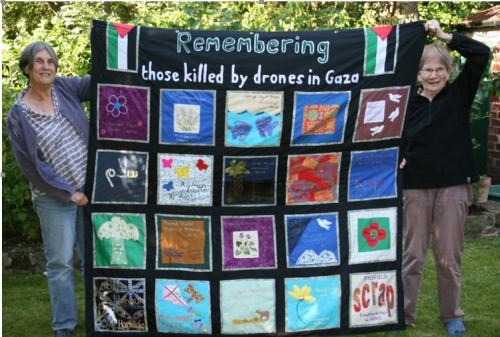 During the day an enormous low loader arrived conveying a military vehicle looking like a missile launcher. Protestors immediately got onto the road and between us we stopped the vehicle going into the Arms fair for two hours.  3 women clambered onto the vehicle and, with a Palestinian flag flying, read out testimonies from families whose children were killed in the 2009 Israeli massacres in Gaza. And then, with the lorry still blockaded and the road therefore closed, we held a dabke dance workshop in front of the lorry, on the road with police dancing round our circle trying to give us an arrest warning. 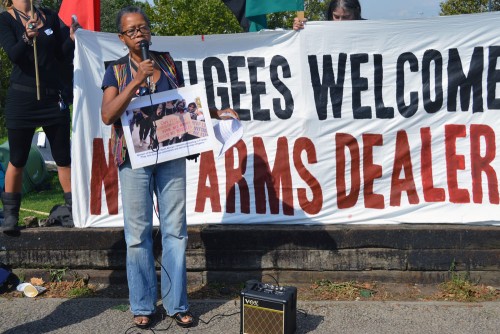 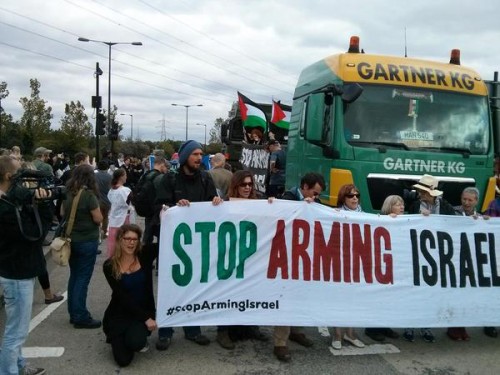 War is good for business and economic growth.
Refugees not arms welcome here.

We found out that the drivers of the low loader we stopped were Hungarian and had driven this vehicle from Southern Hungary, through Austria and western Europe. Sometime over the weekend the driver probably drove past the thousands of migrants walking to Vienna, most of them from Syria and Afghanistan, fleeing wars prosecuted and fed by the sort of materiel he was carrying.

How ironic is this? That killing machines can cross European borders easily whist humans fleeing war torn countries cannot. The stark realisation before us then was seeing how war is so good for business. Weapons used by all and any side in Syria and other conflict torn countries around the world continue to get circulated and traded, making profit for some and for others, their lives are ravaged.

The day was an excellent example of effective collaboration between CAAT, War on Want, and Palestine Solidarity campaign. I met other Green Party members too. It gave me hope we can work together and creatively to advocate for humane and just settlement for refugees, and an end to the arms trade.

You can see films of the action:
https://www.youtube.com/watch?v=ZhxLVg6AZXo&feature=youtu.be&list=PLNye8nqM0ywp7LuyXJ6ldHC8K0C8lpFGB
and here
https://vimeo.com/138567906

‘Testimonials From Families of Palestinian Victims – #OccupyDSEI Day One’
www.youtube.com/watch?v=ZhxLVg6AZXo&feature=youtu.be&list=PLNye8nqM0ywp7LuyXJ6ldHC8K0C8lpFGB