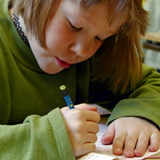 Sheffield Green Party has submitted a response to the School Places consultation, arguing that to get the best outcome for education in the City, changes need to be made to the next stage of consultation about school places expansion in Sheffield.
The Greens also question proposals for 3-18 through schools, and say infant and junior schools staying on their current sites will not only reflect the wishes of governors and parents, but keep essential flexibility for the future.
The Green Party says that for any consultation following a decision on a new school, the Council needs to make public the detail behind their proposals. There also needs to be a ordered way of considering alternative proposals. Those affected, potential sponsors, and architects need to be involved as soon as possible.
Ecclesall Green Party activist Jason Leman said “The Council responded to parents and governors by adding more proposals to the consultation on having more school places, but these proposals were presented without any evidence. Some meant a massive change, merging schools and shifting sites and so on, with no detail. That didn’t just mean it was difficult to comment on changes, it also caused a lot of worry for parents and staff. If consultations had been arranged with the schools affected earlier, that would have really helped.”
“We hope the clear messages that parents and governors have given in the recent consultation are listened to. If the Council decides on building a new secondary school, the next stage of the consultation needs to be better. The Council has shown they can build great schools, but only when they talk to everyone involved.”