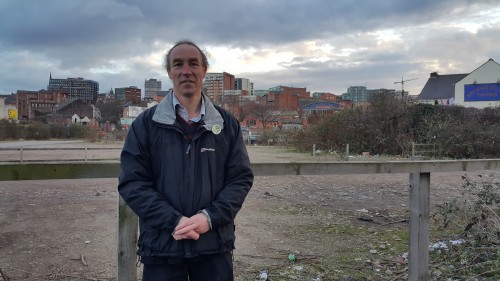 In 2014, Green Party councillors made a fully-costed budget proposal to invest in solar panels on council housing. It would create jobs in the renewable energy sector, reduce fuel bills for tenants and set up a long-term income stream for more investment and services in the future. It is only what individual home-owners have done, but on a scale with vision. The Labour administration rejected the plan, only to propose a smaller scheme under its own name in 2015. But no solar panels have been installed and the 250 jobs scheme has been abandoned.

Other Green ideas have fared better and brought real benefits for Sheffeld’s residents.

Green councillors proposed a living wage for all council employees in July 2009, a policy later adopted.

The Greens were the first party to call for 20mph speed limits on residential roads.

The Greens first called for Sheffeld Homes to be brought back in-house. Buses now run on Boxing Day and New Year’s Day, thanks to the Greens. Last year, the Green budget proposed 10 extra PCSOs, to mitigate cuts to the police. PCSO numbers are now to be protected by Labour’s police commissioner. Advice services, another Green Party priority, have been spared further cuts this year.

The Greens always opposed Labour’s big council tax rise for the 30,000 lowest-income households, saying, in 2013, that the Council should first end subsidies for keeping houses empty. The Greens demanded more help for poorer families; this year, it has been granted. In 2015, the Greens planned for more work on empty and abandoned houses that blight streets. Bringing empty houses back into use helps the housing shortage and brings revenue into the city. These plans have now been adopted by Labour, as have Greens’ calls for more resources to enforce private rented standards of housing.

Of course, more can be done – and the Greens will continue to set out plans for a better way to run public services. What we see are financially viable and balanced ideas being raised by Green councillors, being rejected by the Administration but then being adopted. This is ultimately because they are practical, sensible, socially progressive ideas, that are achievable within the resources the Council still has. Green Councillors can really make a difference.

Douglas Johnson is one of the three candidates for City Ward