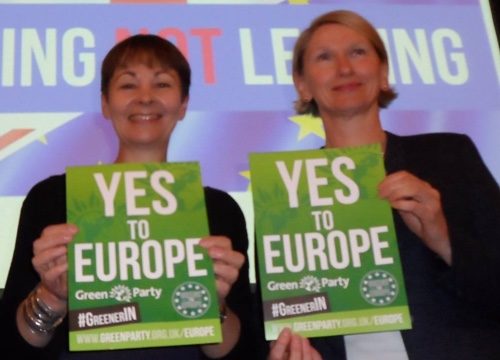 Currently, as members of the EU, we are part of a remarkable collective of individual countries and cultures who willingly entered into a cooperative arrangement for the benefit of member states and the continent as a whole. This is unprecedented in human history.

Are we so arrogant, or so caught up in our former imperialist ‘glory’ to imagine that we could achieve more by going it alone? What kind of country do we want to live in? Would we like to live in Fortress UK, or do we enjoy communicating, collaborating, and learning from a wider community?

Some Leave campaigners argue that the EU is undemocratic.The Leave approach to democracy is curious since only Farage on the Leave side has expressed interest in reforming our own entirely undemocratic and unelected House of Lords. There is a need to reform some aspects of the legislative structure in the EU, and Green MEPs are particularly vocal about this.

When we vote on 23 June, we need to consider the long term implications of our decision for future generations. Will we be a part of something far bigger than ourselves and wrestle with the inevitable compromise this brings ?  Or will we go it alone, with less bargaining power, and fewer allies and friends, as Scotland and Northern Ireland push for independence from the UK to remain within the EU?

The EU was forged in the aftermath of World War 2 to maintain peace through building interdependence and nonviolent resolution of conflict. We still need peace. We still need the EU.

Agree with you fully. Already used my postal vote for remain. Out of the EU Britain would be a sad and lonely place.

The House of lords should be replaced with a 100% elected body of 400-450 Senators if thats what we decide to call them. The elections should be by a PR system (and I’m open minded as to which one we use).

There can be no justification for hereditary peers, no logic in 24 Anglican Bishops being in the Upper House.

Each region should have a fair proportion of senators-current Lords are heavily skewed to the South East.

Powers of the Senate would be similar to current Lords. Elections every five years on the same day as the General Election-which should guarantee a decent turn out. If the PR system uses larger multi-member constituencies the senators would have a South Yorkshire/Sheffield/ Yorkshire role so avoiding confusion of their roles with those of MP’s.

it does seem wrong that Cameron wants to appoint more unelected Lords whilst reducing the number of elected MP’s.