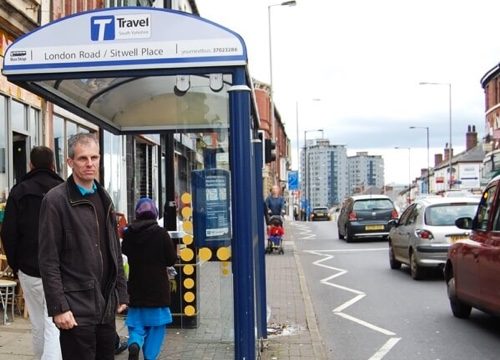 Sheffield’s Green Councillors yesterday failed to persuade the Council to look at new options to bring extra funding for the city’s bus services.

The Greens – whose 2016 budget proposal included funding that would have prevented the recent increase in child fares – called on the Council to look into new ways of funding services, but the proposal was rejected by Labour.

“Sheffield Council has been standing back and watching the decline of the city’s bus services over 30 years. It’s time we started looking for solutions instead of just someone to blame.”

“We are glad our long campaign for regulation of fares, routes and frequencies looks like succeeding – as the Bus Services Bill passes through Parliament – but funding is also a vital part of quality public transport.

“If we are to get back popular services like the Freebee, we need to look for new funding. It is disappointing that the Labour Administration is not even prepared to look.”

1. The Bus Services Bill contains proposals to give powers to regional mayors and transport authorities to improve bus services.  This includes a power of franchising which “identifies which local bus services should be provided in an area and what additional facilities should be provided, rather than bus operators determining the vast majority of services on a commercial basis.”

3. Sheffield Green Party’s proposal to Council on 5th October 2016 is:
That this Council
(a)     believes Sheffield’s once famous bus service is a shadow of its former self following 30 years of declining patronage under different council administrations and national governments;
(b)     notes the recent rise in child fares on Sheffield’s bus network which has resulted in a 100% increase since 2011;
(c)     believes the rise hits hardest a group that has no independent income and the fewest alternative travel options, a group that it is critical to educate and encourage to use public transport as a long-term way of sustaining services;
(d)     notes that the Sheffield Bus Partnership has abandoned its original target of increasing bus patronage in favour of a policy of managing decline, and believes it has therefore failed on its own terms;
(e)     believes with sufficient funding and the right approach, Sheffield’s buses could once again become a very positive and well-used public service, and this should improve public health, reduce traffic congestion and air pollution, and improve access for everyone to key facilities and services such as schools, colleges, shops, employment locations, hospitals and other health services; and
(f)      calls on the City Region to make full use of forthcoming devolved powers included in the Bus Services Bill, including franchising of bus services.
(g)     requests that all alternative sources of revenue for public transport be investigated and that the relevant Cabinet Member brings a report on this matter to a meeting of the Full Council within 3 months.