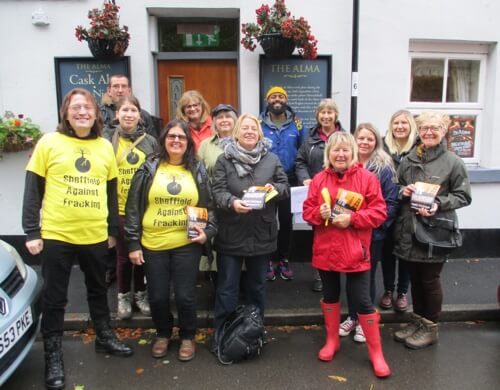 Sheffield Green Party is supporting a campaign to oppose fracking in and around Sheffield.

Sheffield Greens, including former national party leader Natalie Bennett, will be saying “no to fracking” on October 29th at a demonstration outside Barclay’s Fargate branch in Sheffield city centre.

The event will highlight Barclays’ 97% stake in Third Energy, the company that wants to frack Ryedale in North Yorkshire. The protest is being organised by the Sheffield Against Fracking group.

Natalie Bennett and other Green Party members helped to deliver leaflets in Mosborough on Sunday 16th October to publicise a public information meeting there. Held last Tuesday night, a packed room at the Miners Welfare heard a presentation from Frack Free South Yorkshire about the local and global issues around fracking. This followed local residents receiving statutory warning of planned seismic tests for fracking in the area.

“Fracking is an industry developed in parts of America where there are few environmental controls and little oversight. We do not want its cowboy culture here in Britain.

“More, we know that we have to leave at least two-thirds of our known fossil fuel reserves untouched if we are to avoid catastrophic climate change.

“We should not be seeking more, but rather investing in solar, wind and other renewables, as well as energy conservation, which can also deliver more jobs, small business opportunities and community investment possibilities than does shale gas.

“Although the Government has shown it is willing to ride roughshod over the locally elected council in Lancashire, I urge Sheffield City Council to use all its powers to resist applications for fracking anywhere within the city boundaries.”

Details of the Ineos fracking licence areas including all of Sheffield are here: http://frack-off.org.uk/social-media-post/ineos-fracking-plans-threaten-the-whole-of-the-uk/

Details of the demonstration at Barclays, which starts at 11am, are at: http://www.sheffieldagainstfracking.org.uk/meetings-and-events/boycott-barclays/.