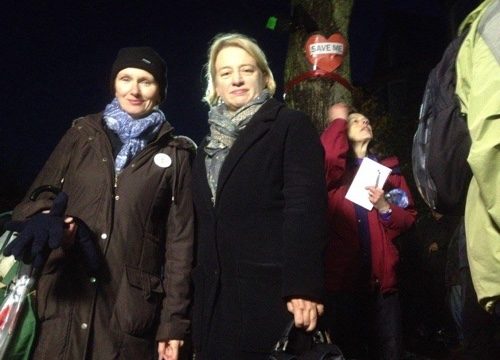 The dawn raid on Rustlings Rd, approved and authorised by the Labour council, shocked not only sleepy residents, but people across the country.

Woken in the early hours by police, they were ordered to move their cars.  Some were towed away without further notice.  Unlike the first two tree protesters arrested on Marden Rd (on 2nd November), where police took three hours of negotiation, the two retired women and one young man were whisked away within minutes.  What motivated the Labour administration to sanction such oppressive behaviour?

The trees by the park were popular.  59 out of 65 residents in the council’s survey wanted them to stay.  What the residents of Rustlings Rd didn’t know is that the Council’s Independent Tree Panel agreed that 6 out of 8 did not need felling.  But the Council had sat on that report since July and only published it at 4.25am on the morning the trees were cut down.

The council have outsourced street maintenance to a private company with a legal duty to maximise shareholder profit.  Our democratic rights have been surrendered to Amey and their contract cannot be scrutinised due to commercial confidentiality.  Streets without large mature trees are cheaper to maintain, maximising profits.  When decisions are made on financial considerations alone, local communities lose out to shareholders.  Only the Green councillors opposed this 25-year Private Finance Initiative contract.

As a resident, would you prefer public services run by the people, for the people?  If this dawn raid is anything to go by, I’d say the Labour council have shown their loyalty is to Amey, not you.  That’s just one of the reasons we argue that Sheffield people deserve better councillors and MPs.

There is One Response to Heavy-handed tactics on 17th November