Join us on the Fight for £10 March this Saturday 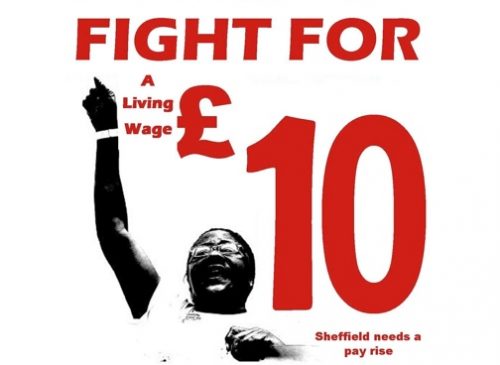 Next Saturday [December 17] I’m delighted to be marching with the Sheffield Needs a Pay Rise campaign.

Starting from Devonshire Green at 1pm, we’ll be calling for a real living wage of £10 an hour for all workers.

So many working households in Sheffield, and across South Yorkshire, are facing a Christmas of struggle and fear.

In shops, in call centres and other workplaces around our city, workers are at full stretch, serving the holiday rush, yet not being paid fairly for their efforts.

A lot of that money is going instead into the profits of big multinational companies, many of which are avoiding paying UK taxes. And to the swollen pay packets of the corporate fat cats and bankers.

Visiting shops around the city with fellow campaigners, I’ve found much interest in the campaign from workers, many of whom are paid at or little more than £7.20 an hour. For workers under the age of 25, wages are even lower.

Such low wages are awful for individuals, but they’re also terrible for our economy. They mean workers are not able to spend money in their communities – making it hard for local businesses and services to keep going.

Improvements will only come if we work together to achieve them. Please join us on the march on Saturday, and tell your friends and colleagues about it.