The Council should tackle the exploitation and harassment of women.

As a Green Party councillor for City Ward, I welcome the opportunity to comment on this draft policy.

Sheffield prides itself on being a city that encourages equality, including greater equality between women and men – witness the Women of Steel campaign. Sheffield Green Party believes the Council’s policy on sex establishments should make a practical difference towards the general aim of improved equality. 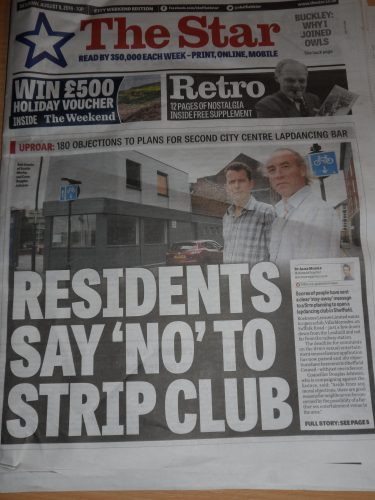 My colleague, Cllr Rob Murphy, and I supported many groups and individuals opposed to the ‘Villa Mercedes’ lap-dancing club in the Cultural Industries Quarter. I am pleased that our efforts led to the application being withdrawn, avoiding the negative effect it would have had on local residents, businesses, not-for-profit and charitable organisations, schools, colleges and students and on women engaged to work in the proposed venue.

That application showed a need for the Council to improve its policy position and we therefore welcome the proposal to introduce a maximum number policy.

We do not see any additional need to regulate the overall number of to ‘sex cinemas’ or ‘sex shops.’ There are currently no ‘sex cinemas’ in Sheffield and the licensed shops do not seem to cause such a problem as to require a change of policy. However, I accept that clustering of ‘sex shops’ might affect the local community. I therefore agree that the limit of one per ward achieves a suitable balance.

The position of ‘sexual entertainment venues’ (SEVs) is different, however, because the ‘product’ being sold is human, not material.

Many respondents in the Villa Mercedes case said they would not want to live or work close to a SEV. In my view, SEVs should not be located close to residential areas, nor shopping centres. Nor should they operate in areas where they could affect other businesses.

The evidence from local businesses in connection with the Villa Mercedes application described the adverse impact on jobs and enterprise. Of particular concern was the impact on women, both as employees and as customers of existing and new businesses The application also showed that SEVs create relatively few jobs themselves.

Whatever is said about ‘dancers’ freely choosing to work in SEVs, the fact remains that there is a clear gender difference between the paying customers, who are predominantly male, and the women engaged as ‘dancers’. Furthermore, the practice of requiring dancers to be self-employed places them in a much worse position than the predominantly male staff who enjoy full employment rights.

The public sector equality duty (PSED) in section 149 of the Equality Act 2010 is therefore clearly engaged. The council must comply with its legal obligations and it can best do so by better controlling future applications for SEVs.

I disagree with the statement in the draft policy that “it is not considered likely that the equalities obligations are at risk as there is no perceivable risk of unequal access to the service between different equalities groups.” In addition to the duty described at Part 7 of the draft policy, there is also a duty to have due regard to the need to eliminate sexual harassment, which I believe should be expressly referred to in a revised policy. The policy should also refer to the legal duty to remove or minimise disadvantages facing women.

As there are already 2 licensed SEVs in Sheffield, the effect of a policy of a maximum of 2 SEVs is that no new applications would be expected to be granted. In my view this is a realistic policy for the council to adopt in the present situation. A higher number would be unlikely to address the issues described above and a lower number would be a policy at odds with reality.

A maximum-number policy does not absolutely prohibit an SEV licence but it does create the presumption that a licence will be refused. It is open to an applicant to show why a licence should be granted, despite the policy. It would therefore be helpful for the revised policy to state explicitly that the PSED described above will be applied to any individual application as well as to the framing of this policy.

In order to protect both dancers and customers, the standard conditions at Appendix A should include a term to the effect that “No person may provide relevant entertainment at the premises unless employed directly by the license holder under a written contract of employment.”

I trust these views are of assistance and will be taken into account in framing the policy.