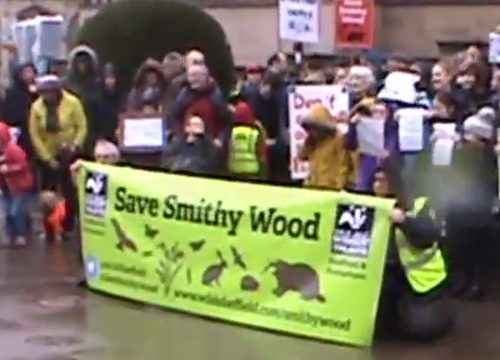 Save Smith Wood protest at the Townhall

Last week saw yet another postponement of the decision on planning permission for a motorway service station to be built on Smithy Wood, an ancient woodland which lies in Sheffield’s Green Belt between Chapeltown and Ecclesfield.

By their very nature, ancient woods are irreplaceable.  Smithy Wood is at least 850 years old, and is regionally important for its ecological diversity.  It cannot be picked up and moved, and new tree planting simply could not compensate for its loss.  Greno Woods, which fills the horizon from Chapeltown station and is now owned by Sheffield Wildlife Trust, is a much better model for how to treat our ancient woodlands.

The Smithy Wood site has never previously been considered for development, and to do so now would add congestion to an already busy road network.  The plan would also add to dangerous air pollution that already contributes to an estimated 500 premature deaths in Sheffield every year.  Proposals for a motorway service station at Junction 33, at Catcliffe, have the same problem.

With proper investment in our railways, including the overcrowded local line through Chapeltown, there would be less need for motorway travel.  There are already two service stations on the M1, less than 30 miles apart.  There is no need for another.

Smithy Wood has been designated as a local wildlife site to protect threatened species and habitats.  We should not degrade it to make way for shops and a car park.  Developers should take the opportunity of this latest postponement to rethink their plans and withdraw these proposals.  #SaveSmithyWood