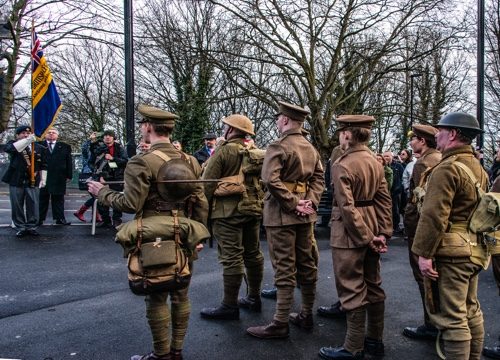 Sheffield Green Councillor Magid Magid spoke on Sunday at a memorial event for soldiers from Crookesmoor School who lost their lives in WWI. Trees were planted a century ago to honour their memory and service, but now face being felled.

Cllr Magid, who took a leading role in organising the event, said,

“The trees on Oxford Street and Tay Street were planted on 20th March 1917, as a living memorial to honour the local ‘Crookesmoor Boys’ who had died and also those who were still serving in World War I.

“As well as serving as living memories of the fallen, these trees are also remarkable from a historical perspective. They are potentially the earliest memorial of their kind, as they were planted before the war ended.

“On Sunday, the community came together to respect the memory of the ‘Crookesmoor Boys’. Soldiers marched from the train station up into Crookesmoor and were met by residents and community leaders for a memorial service.

“The event was the result of a fantastic collective effort from residents, campaigners, and councillors across all parties. I would personally like to thank Deputy Lieutenant Mrs Pam Liversidge, Deputy Lord Mayor Anne Murphy, Royal British Legion County Chair Christine Spencer, and each and every resident involved in putting this together.

“Devastatingly, many of the memorial trees are currently under threat of being felled.

“Their loss would be an immensely sad thing to happen for this community, for the ‘Crookesmoor Boys’, and their surviving family.

“Our community is calling for the memorial trees, and the memory of the soldiers they were planted to remember, to be respected and preserved, so that we may continue to pay our respects as we did on Sunday afternoon.”